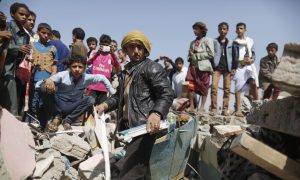 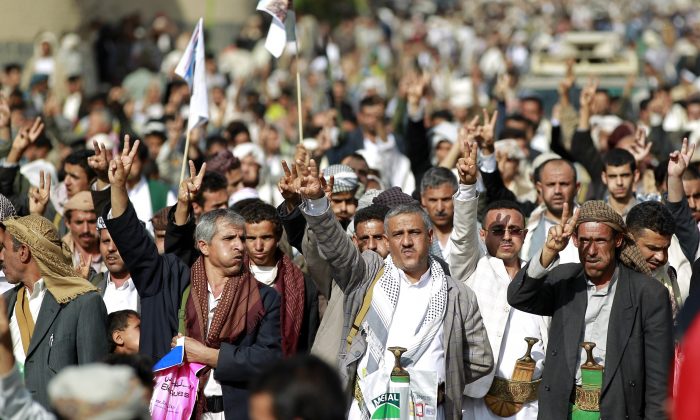 Yemeni supporters of the Shiite Huthi rebel movement, some of them chewing Qat, a mild drug used daily by many Yemenis, raise their weapons during a rally to protest against a military offensive by a Saudi-led coalition, on August 24, 2015 in the capital Sanaa.(Mohammed Huwais /AFP/Getty Images)
Middle East

Yemen Factions Gear Up for Key Battle Over Central Province

SANAA, Yemen—Yemen’s warring factions on Sunday braced for a key battle in a central province, where victory could allow pro-government forces to move rapidly north into the heartland of the country’s Shiite rebels.

Security officials from both sides said the focus was now on Marib, an oil-rich province that supplies the rebel-held capital of Sanaa with electricity and fuel, after months of combat and airstrikes that have killed some 2,000 civilians, according to the U.N.

Pro-government forces have recently tightened their grip on the province’s capital, also called Marib, while the Shiite rebels, known as Houthis, have consolidated their positions on its outskirts, digging trenches and laying mines in nearby Jawf, security officials from both sides and witnesses said.

If pro-government forces manage to push the rebels out of Marib, they could potentially advance rapidly across Jawf, a flat, desert province bordering Saudi Arabia that is also a gateway to Saada, the rebels’ northern stronghold, where Saudi planes have been dropping flyers urging people to support the “legitimate” government of internationally-recognized president Abed Rabbo Mansour Hadi.

Yemen’s conflict pits the Houthis and allied units of the splintered army against forces loyal to Hadi as well as southern separatists, local militias and Sunni Islamic militants. Hadi and his government are in exile in Saudi Arabia.

In their foothold in Marib, the pro-government forces were joined earlier this week by hundreds of Yemeni fighters, fresh from military training in neighboring Saudi Arabia, which has been leading the Arab coalition launching airstrikes against the Houthis since March, pro-government security officials said.

Since last week, the anti-rebel forces have set up camp for military experts from United Arab Emirates and Saudi Arabia and renovated a local oil company’s airport, which received the latest planes carrying military equipment from the coalition on Sunday, the officials added. At least six Apaches have landed thus far, they said.

Meanwhile, the Houthis in Saada tried and failed to persuade one of Yemen’s most senior military officials who claims neutrality and controls many troops, a man known as Maj. Gen. al-Amalaqa, to bolster their forces in Marib.

Nevertheless, former President Saleh said his forces, along with the Houthis, are “waiting” for the pro-government forces, in a televised speech on his Yemen Today channel.

The anti-rebel forces, pro-government security officials said, aim to push north to Jawf rather than the mountainous capital of Sanaa, because Houthi fighters there are less vulnerable to the Saudi airstrikes. If the pro-government forces seize Jawf, the officials said, they will move on to Saada instead of Sanaa.

Officials have also prioritized Saada over the capital because its fall, as the main Houthi encampment, would be a greater moral blow to the rebels, activist and analyst Nabil al-Mohamedi told The