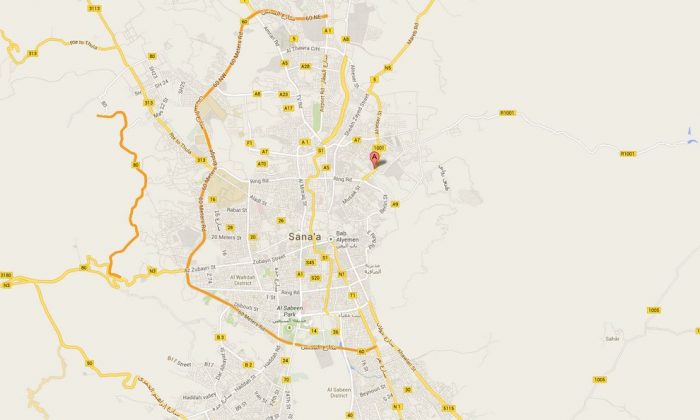 Reports on Monday said there was an explosion and gunfire near the US Embassy in Yemen's capital, Sana'a. (Screenshot/Google Maps)
Middle East

A large blast and gunfire were reported near the U.S. Embassy in Yemen located in the capital, Sana’a, on Monday, according to security officials. However, an official describing himself as a Yemen government spokesperson stressed it was not an attack and the blast that locals heard was actually “wedding fireworks.”

Eyewitnesses told the independent Yemen Post that an explosion was heard, but it was not an attack on the embassy. The explosion took place between two and three kilometers (around 1 mile) from the embassy, it added.

Security officials said that ambulances were seen rushing toward the embassy area, and officials implemented strict checkpoints on roads near the building, according to the Post.

Citing security officials and residents, The Associated Press reported there was also heavy gunfire heard near the embassy following the blast.

Mohammed Albasha, the Yemen spokesperson in Washington, D.C., wrote on Twitter: “#US EMBASSY IN SANA’A WAS NOT ATTACKED NOR WAS THERE ANY BOMBING IN THE VICINITY OF THE EMBASSY IN #YEMEN.”

He later wrote that the explosion was “wedding fireworks. Police detained persons who set the fireworks off.”

The U.S. Embassy told CBS News later that neither it or its staff are in any danger.

Local reporters and residents posted on Twitter, saying there was a blast near the embassy.

“Ambulances rushing to the area,” said Haykal Bafana, a lawyer based in Yemen. “Streets closed.”

A local news agency posted on Facebook, saying that a “a loud explosion near the U.S. embassy was witnessed Sanaa, security closed nearby streets.” Shuaib M. Almosawa, a journalist and former editor with the Yemen Observer, described the social media account as “relatively accurate.”

It is unclear if there were any injuries.

The embassy has yet to confirm if there has been an explosion.

Yemen is in a war with al-Qaida’s local branch, also known as al-Qaida on the Arabian Peninsula, which is considered by the U.S. to be among the most dangerous offshoots of the terror network.