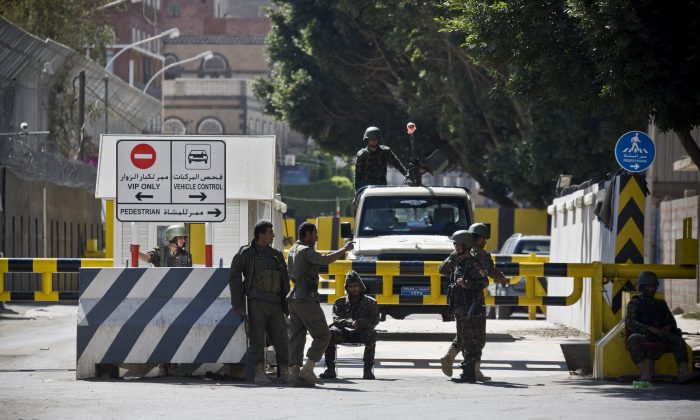 Soldiers stand guard at the gate of the French Embassy, as Yemenis protest against caricatures published in French magazine Charlie Hebdo in front of the embassy in Sanaa, Yemen, Saturday, Jan. 17, 2015. (AP Photo/Hani Mohammed)
Middle East

SANAA, Yemen—Yemeni authorities have arrested two French citizens suspected of being members of al-Qaeda, the country’s national security chief said Saturday, without mentioning whether they were involved in this month’s attack by gunmen on a French newspaper.

Gen. Ali Hassan al-Ahmadi says the pair were arrested on charges of belonging to the militant group, adding that al-Qaeda has around 1,000 members in Yemen, from 11 different countries.

“Recently two Frenchmen were arrested on charges of belonging to al-Qaeda,” he told reporters in the capital, Sanaa.

Security officials told The Associated Press that the arrests were made before the attack on satirical newspaper Charlie Hebdo in Paris, with one saying dozens of westerners including French and other Europeans belonging to al-Qaeda are present in several of Yemen’s rural provinces. They spoke on condition of anonymity because they were not authorized to release the information otherwise.

Earlier Saturday, Shiite Houthi rebels abducted the chief of staff to Yemen’s president in the center of the capital, Sanaa, starkly highlighting the unrest plaguing the Arab world’s poorest country.

The rebels, who have taken over large swaths of Yemen, claimed responsibility for kidnapping Ahmed Awad bin Mubarak. In a statement, they said they abducted him to disrupt a meeting scheduled for the same day that was to work on a new constitution and the reorganization of the country into federally organized regions.

“We will not allow this draft resolution to pass,” they said, referring to a reform agreement made last year to divide the country into six regions. They had previously rejected the plan.

Officials said gunmen kidnapped bin Mubarak and his two guards when they stopped their car in central Sanaa. They spoke on the condition of anonymity because they were not authorized to brief journalists.

One of the youngest politicians in Yemen, 46-year-old businessman-turned-political figure bin Mubarak emerged during the uprising that forced longtime leader Ali Abdullah Saleh to step down in a U.S.-backed agreement.

Critics say the Houthis are a proxy for Shiite Iran, charges the rebels deny.

Bin Mubarak is personally at odds with the Houthis. He was the president’s choice for prime minister last October, but his nomination was derailed after the Houthis opposed him for his ties to the president.

A separate protest in front of the French Embassy saw demonstrators express their outrage over the satirical Paris newspaper Charlie Hebdo’s cartoon depictions of the Prophet Muhammad.