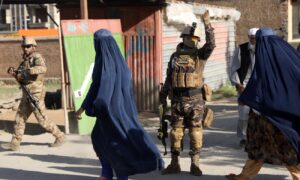 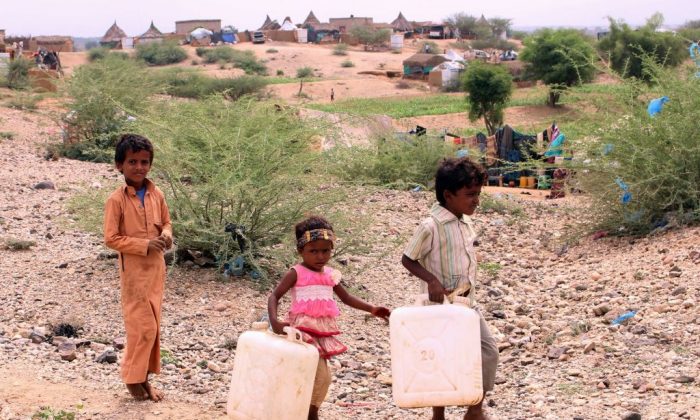 Displaced Yemeni children from Hodeida carry water containers as they walk to a nearby well to fill them in the northern district of Hajjah province, on October 22, 2018. (ESSA AHMED/AFP/Getty Images)
Middle East

Yemen: A Country in Most Need of Help

Yemen has the greatest population of people in need of urgent assistance in the world, new data has revealed.

The Food Security Information Network’s (FSIN’s) Global Report 2018 shows about 17 million, or 60 percent of Yemeni, do not have a secure source of food in the past year.

Three major reasons for food insecurity highlighted in the report include conflict, population displacement, and economic collapse. Internal conflict in Yemen has caused restrictions in the trading industry, hitting the nation’s food supply since 80 percent of the nation’s food is imported.

The report identifies displacement has creating difficulties in maintaining a stable lifestyle. About 3 million people do not have a home, and are exhausted from trying to cope with conflict daily, the report said.

Economically, about 78 percent of Yemen households are worse off compared to their pre-conflict days in February 2015, according to the report. Food prices have increased due to poor agricultural production within the country. Below average rainfall also created challenges in cultivating cereal grains.

In addition, there is limited feed to raise livestock, and many farmers are forced to sell livestock to cover basic operating costs. Conflict along the coast of the Red Sea has also made it hard to fish, according to the FSIN report.

Joint Efforts to Help From Abroad

In 2016, the United States provided funds to help replace four cranes damaged in an airstrike, but shipment did not make it through, according to a 2017 report by Jeremy Sharp who is a specialist in Middle Eastern affairs.

According to that same report, then U.S. Secretary of State Rex Tillerson received a letter from several House members in 2017, asking him to “use all U.S. diplomatic tools to help open the Yemeni port of Al-Hudaydah (Hodeida) to international humanitarian aid organizations, allowing them to import food, fuel, and medicine into northern Yemen—and save the lives of hundreds of thousands of Yemeni children who face starvation.”

Forms of aid include, basic education, maternal health, and agricultural assistance programs according to Sharp.

In a 2017 high level event that promises to aid the humanitarian crisis in Yemen, The World Bank partnered with United Nations (U.N.) organizations to help address Yemen’s challenges. A relief package is under consideration to aid Yemen’s food crisis. The package includes $200 million in emergency cash, $80 million toward health and nutrition, a $36 million for agriculture and food security, and a proposed $500 million for food imports, according to The World Bank.

In April 2018, the U.N., Swedish, and Swiss authorities promised over $2 billion to aid Yemen, according to U.N. Office for the Coordination of Humanitarian Affairs.

“Humanitarian resources are very important, but they are not enough. We need unrestricted access everywhere inside Yemen, and we need all the parties to the conflict to respect international humanitarian law—and to protect civilians,” said U.N. Secretary-General António Guterres.