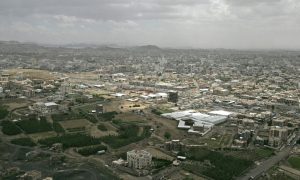 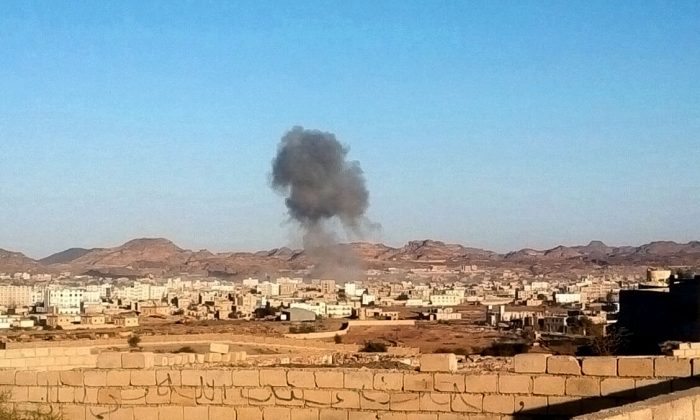 Smoke rises from the site of a car bomb explosion in Radda town, 100 miles (160 kilometers) south of the capital Sanaa, Yemen, Tuesday, Dec. 16, 2014. Two suicide car bombers rammed their vehicles into a Shiite rebels’ checkpoint and a house south of the Yemeni capital Tuesday, as a school bus traveling nearby killing at least 25 dead including at least 15 primary school students, Defense Ministry, rebels and witnesses. (AP Photo)
Middle East

SANAA, Yemen—Two suicide car bombers rammed their vehicles into a Shiite rebels’ checkpoint and a house south of the Yemeni capital Tuesday as a school bus was traveling nearby,killing at least 26 people including at least 16 primary school students, according to the Yemeni government, rebels and witnesses.

Witnesses said that the first car was loaded with potatoes apparently disguising explosives underneath. When the car bomber arrived at the checkpoint manned by rebels, he blew up the vehicle as the students’ bus was passing. After the first explosion, a second car targeted the home of a Shiite rebel leader, Abdullah Idris.

State TV quoted the country’s Supreme Security Committee — Yemen’s highest security body — as saying that at least 26 including 16 students and 10 civilians were killed in the twin bombings.

Witnesses at the site of the attack said that the rebels brought four pickup trucks and dumped dozens of bodies into them while several ambulances rushed to the scene to carry away the wounded. Body parts littered the street along with open bags of potatoes.

The Shiite rebels, known as the Houthis, blamed al-Qaeda for the attack in the Radaa area of Baydah province, calling it “the ugliest crime against childhood.” The group said the school bus was carrying female primary school students.

The witnesses spoke on condition of anonymity for fear retribution.

This is the second time Idris’s house has been targeted since October. The Houthis and al-Qaeda have been fighting in Radaa since the rebels overran the area in October.

The empowered Shiite rebels have made significant military advances in recent months, seizing control of the capital and other strategic cities.

Yemen has been gripped by a power struggle between President Abed Rabbo Mansour Hadi and the Houthis, who have allied with his predecessor, ousted President Ali Abdullah Saleh. On Tuesday, Saleh loyalists, who form the majority of parliament, derailed a vote of confidence on the new government’s program. A raucous session Tuesday came to an abrupt end before a vote, after Saleh loyalists bickered over internal party politics.

They accuse Hadi of backing U.N. sanctions against Saleh and two top rebel leaders, and have called on the government to explicitly denounce the sanctions.

Also Tuesday, Shiite rebel gunmen, who seized control of Sanaa in September, surrounded the ministry of defense and packed the city’s nearby streets, preventing the minister from accessing his office. A day earlier, the minister had kicked out the rebels from around the ministry for blocking his chief of staff from entering.

Later, Hadi drove to the ministry, effectively ending the siege.