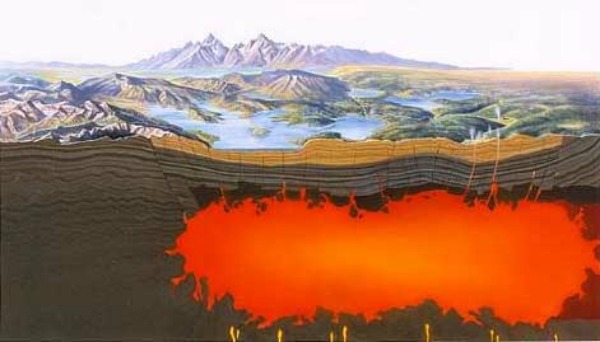 There’s been a spate of conspiracy theories and rumors saying that the Yellowstone caldera will blow up, with a video going viral last month of buffalo “running” away as an indicator that something is about to happen.

“The bison captured on camera were coincidental,” he said, according to a local report. “But there was a big earthquake around Yellowstone at the same time. The myth is that the bison know something we don’t know about Yellowstone. Truth is that animals may be perceptive to small earthquakes in certain situations. However, there is no evidence to show that big animals, bison for instance, are responsive to the small earthquakes.”

The 4.8-magnitude earthquake took place on March 30, and it was the largest to hit the area in about a year.

“Yellowstone is an active volcano, in the sense that it has erupted a lot and will erupt again,” Johnson added. “It will erupt again in the future; there is not a very good probability that it will erupt in our lifetime.”

He said that if eruptions were clockwork, Yellowstone would have erupted already. “Bigger eruptions happen less frequently. Yellowstone might wait a half a million years and then it blows up big,” he said.

“If that were to happen tomorrow that would affect the globe,” Johnson added. “It would be worse for those communities that are downwind from the eruption there would be substantial loss of life. You’d be a lot worse off in Denver than if you were in Boise.”