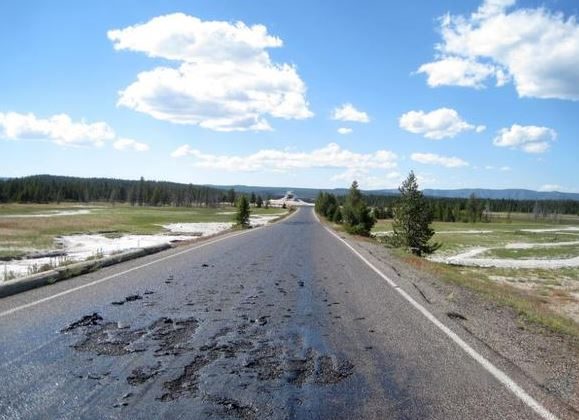 The melting road at Yellowstone National Park has helped renew theories that the supervolcano underneath the park could erupt sometime soon.

Wired notes that the road melting signals something more dangerous–because chances of it happening soon are much more probable–hydrothermal explosions, which the U.S. Geological Service calls “very large” and “violent.”

“These are caused by superheated water and steam getting trapped and then releasing catastrophically. These can happen without warning and if you’re too close, you’ll be covered with boiling water and debris from the explosion,” Wired says.

“As usual, the place to look for the most accurate information about potentially hazards at Yellowstone is the Yellowstone Volcano Observatory. If they’re worried, so should you. They monitor the temperatures of these hydrothermal features across the caldera and if there are widespread changes, they examine them to see if they could be related to magma moving (least likely) or merely the shifting of the hydrothermal system (most likely).

“Rmember, the increasing heat at the surface near a volcano isn’t always from magma — it can merely be caused by changes in how hot water and steam move through the crust. It is one of the ways that volcanoes can dissipate the heat released by magma cooling underground and more importantly, it doesn’t have to be magma that is trying to erupt.”