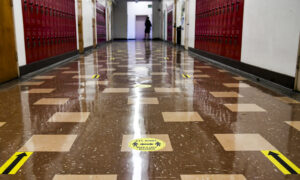 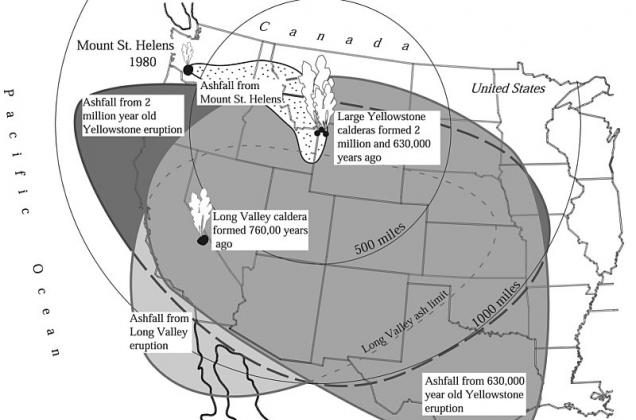 This map from the U.S. Geological Service shows the range of the volcanic ash and debris that was deposited after the three large Yellowstone volcano eruptions over the last 2.1 million years. as well as the Mount St. Helens eruption. (USGS)
US

Yellowstone Volcano Eruption: If Supervolcano Erupts, What Could People Do?

The possibility of the volcano under Yellowstone National Park erupting has increasingly caught the attention of people around the United States (and even other parts of the world), and a number of discussions have centered on potential action plans if an eruption does happen.

Note that these discussions are purely hypothetical and that most scientists have emphasized that the chances of Yellowstone having a major eruption again anytime soon are actually diminishing.

At the same time, several agencies and universities do constantly monitor signs from the caldera to be able to warn people if there is an eruption. And if an eruption did happen, it could cover half of North America in ash and debris, with winds possibly distributing it even further.

First, some survival blogs suggest stocking up on supplies if you live in an area that would be affected by a large eruption. Supplies include dust masks, goggles, non-perishable food, and drinking water.

Radios, flashlights, and extra batteries, as well as extra blankets and maps of potential places to evacuate to are also considered essential, as are huge tarps that could cover your home and vehicles. Duct tape would be good for sealing gaps between windows and walls, etc.

People posting on forums including godlikeproductions, Escapist Magazine, and Project Avalon described what they would do.

Since I live on the East Coast of America, Ash is gonna be a problem. I’d have to towel up all the creeks and crevices in the house so that it couldn’t get in. Also, Water is a priority since most of it will become ash polluted. So I’d be storing water bottles and hope it can last long enough for the ash to stop.

I’ll also have non-gas generators, millions of batteries, and a ton of movies I would want to ride out the initial fallout, then when the worst is over, I will go out and scavenge. Plus, I will stock up on Diabetic Supplies because I am a diabetic.

Start filling everything up with drinking water.

Start making breathing filters out of any cloth I can find.

Hope and pray my roof doesn’t collapse from the weight of the ash.

Even when there is little hope, I would still try to survive. For myself, for man, for the earth itself.

I’ve thought about this and there are a few ways I see surviving.

1. Outlast the hell storm. Basically have 2 year+ food to survive the ashy winter and cold dark days. Aside from food you would need a huge supply of seeds to plant once you can finally grow food. Even worse you would likely need tons of fresh soil since the ash would render the soil outside worthless.

2. Generate enough wind power to grow indoors. With enough electricity you could set up LED light fixtures indoors and grow food for yourself and some small livestock. Rabbits, chickens, guinea pigs etc.

Both scenarios require lots of water too. You can never have too much potable water!

There maybe other scenarios but those are the main two I could think of.

I live in Ohio, by looking at the map of the show you probably just watched, I am [expletive].

If there is not advanced warning: Wait for ash
If there is: Buy barrels of water and beans, a rifle, 500 rounds, chemical toilet, candles and as many books as I could get my hands on.

Hopefully the power will stay on and I can play my xbox, if not, books.

Buy some sort of air-recycler, airtight my house as best as possible and hunker down.

Lol, so much paranoia.

“The U.S. Geological Survey, University of Utah and National Park Service scientists with the Yellowstone Volcano Observatory maintain that they “see no evidence that another such cataclysmic eruption will occur at Yellowstone in the foreseeable future”

If three groups say its most likely not going to erupt in the foreseeable future, then I’m probably going to believe them. Don’t worry about it.

Wait for it to be as disappointing as all of the other “Global Crisises” then laugh at all of the panicky people who hoarded a bunch of crap for nothing. (Unless they were in the vicinity of the blast radius, then I would pray for their safety.) The only natural disaster that wiped out a large chunk of the world’s population and started an ice age (that my general knowledge is aware of) was a massive meteor colliding with the planet. That sparked HUNDREDS of eruptions around the world, so I find it kind of hard to believe that one volcano, despite its size, would be able to literally destroy every civilization in the world at once.

Remember the eruption of Mt. Saint Helens in Washington State? Yeah that caused a lot of damage, but the landscape was able to grow back, richer in nutrients even than before the eruption. The size is undoubtedly noticeable in terms of comparison, but the ash eventually dissolved, and Washington State wasn’t exactly frozen over in its wake. (And if it were spread across as vast an area as the entire atmospheric surface of the planet, the ash from one volcano probably wouldn’t be enough to blot out the sun in every corner of the globe.) Plus during the last ice age, not every creature died, the ones that survived adapted. We can do the same, especially our species because we’re logical thinkers and can find ways to adapt in order to survive.

The people who monitor the volcano don’t expect it to be anywhere near erupting for at least another 1,000-10,000 years from now, at least for it to be extremely detrimental to the planet’s ecosystems. Plus, volcanos usually don’t “just erupt” whenever they feel like it. There’s usually a build-up and several signs that occur first that would give the people surrounding the area ample notification. Such as earthquakes, smoke, changes in the wildlife patterns, etc.

When that huge ash cloud descends upon you, you’ll find it almost impossible to breathe, even in your own home, and then you’ll hear the creaking of the roof……………… CRASH… if you survive that, running out into the open, you’ll be engulfed by thick, choking ash, and won’t last more than an hour, as your lungs slowly turn into blocks of cement

it only takes SIX inches of ash to collapse a roof, but there’s more, you knew there was, didn’t you?

the ash will generate massive rainstorms, which in turn will create lahars on a biblical scale, very probably entombing you in a concrete like flood, to be chiselled out in a few tens of thousands of years by blinking, puzzled archaeologists, just like those animals entombed 1000 miles from the Bruneau-Jarbidge eruption millions of years ago.

don’t think I am gloating though. at least your demise will be relatively quick.

I would head 1/4 mile down the road to Walmart and collect all the food I could fit in my car. I would fill up all the containers and bathtub with water. I would get out the gas masks because you would need to go outside to clear off the ash from your roof or it will collapse. And of course, I would gather my family around and lock all our doors and arm ourselves.

Then, all you can do is pray. Living in Kansas, the chances of survival from a major YS eruption would be slim.

Fortunately, we are far enough away that it would take a little bit of time for the few inches (maximum speculated) to reach us. I would definitely notify everyone I could, do a quick inventory on my food, water, filtration masks (N95) and pantyhose. (Pantyhose is supposed to help reduce the ash buildup on vehicle intakes so your vehicle can run a little bit longer.) I would hopefully have time and an opportunity to beef up whatever I think is lacking in my inventory. Seal all my doors and windows the best I can and break out my defenses.

The biggest worry I would have is what happens after. The “enemies at the door” (foreign and domestic!), the “nuclear” type winter weather for years to come preventing growing crops and raising livestock, the lack of foodstuffs and potable water and the acid rain/silica particles in the atmosphere. I would hunker down with my Beloved and hope for the best.

Yellowstone Volcano: Supervolcano Eruption Would Last for ‘Many Months,’ Possibly Even ‘Years’