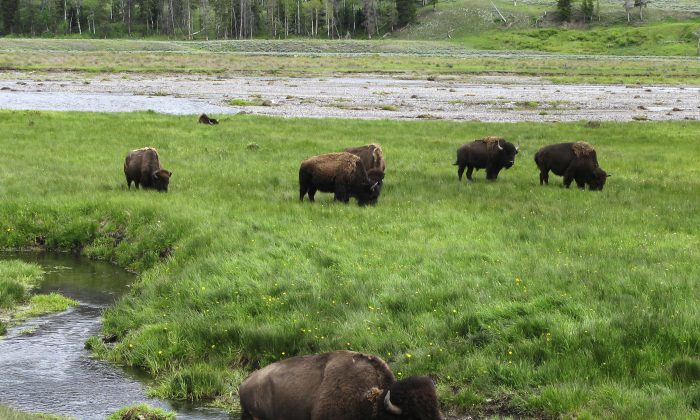 Bison graze near a stream in Yellowstone National Park in Wyoming on June 19, 2014. (AP Photo/Robert Graves)
US

BILLINGS, Mont.—A wildlife advocate and a freelance journalist sued the National Park Service on Tuesday to gain access to a program that ships Yellowstone National Park bison to slaughter.

The lawsuit filed in U.S. District Court in Wyoming comes as federal and state officials plan to kill up to 900 bison this winter through slaughter and hunting. It’s part of a much-criticized effort to reduce the size of the park’s bison herds, in order to protect livestock in Montana from the disease brucellosis.

During the capture operations, portions of the park near its border with Montana are closed as bison attempt to migrate in search of food at lower elevations in Montana. Public access also is restricted at a large corral that holds bison destined for slaughter.

Those restrictions violate free speech protections under the First Amendment by limiting access for journalists and the public, according to the lawsuit.

The plaintiffs in the case are Stephany Seay with the Buffalo Field Campaign and New York-based freelance journalist Christopher Ketcham. They’re being represented by attorneys with the Animal Legal Defense Fund; a private Wyoming law firm, Fuller, Sandefer and Associates; and two constitutional law professors from the University of Denver.

The attorneys wrote that the park’s restrictions amount to censorship of those trying to draw attention to the slaughter program in an effort to change it.

Yellowstone spokeswoman Sandra Snell-Dobert said the restrictions are meant to protect park workers and the public. Moving and sorting bison can be dangerous, particularly within the narrow confines of the corrals, Snell-Dobert said.

The lawsuit says such safety claims are exaggerated and that access to the corrals was routinely allowed until 2006, with no reports of anyone being injured.