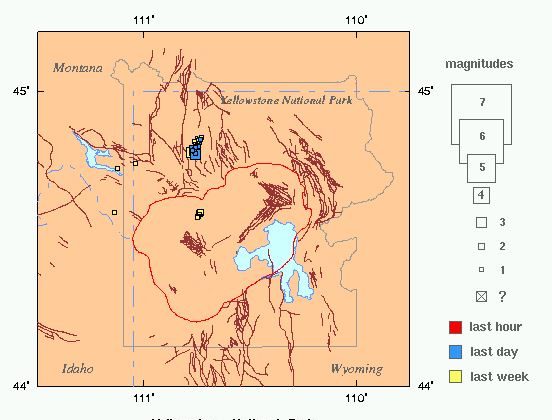 (University of Utah)
US

Seismographs have picked up a swarm of earthquakes in the northwestern corner of Yellowstone National Park, including dozens early Tuesday.

The University of Utah Seismograph Station reported five small earthquakes including those with magnitudes of 3.4, 2.7 and 3.2 in a 20-minute period starting at 3:33 a.m. in an area 16 to 18 miles south of Gardiner.

Earthquake information specialist Paul Roberson says there were another 20 to 30 small quakes Tuesday morning that hadn’t yet been posted on the university’s website. He called it a fairly normal swarm for Yellowstone. He didn’t expect there to be any damage.

Seismographs recorded 31 quakes in the same area south of Gardiner on Saturday, while another 23 were reported last Wednesday and Thursday in an area between 18 and 19 miles east-southeast of West Yellowstone.

A more powerful swarm of quakes in March prompted speculation that the volcano under Yellowstone might be ready to blow.

However, park officials and monitors of the situation, such as the University of Utah, said that that wasn’t the case.

Earthquakes are common in the area, with between 1,000 and 2,000 quakes in the area per year due to the volcanic and tectonic nature of the region.

The volcano under the park is so large and has the potential to produce such a massive eruption that it’s often referred to as a supervolcano.

Most researchers agree that the volcano will erupt again after last spewing about 700,000 years ago, but are in disagreement over when that will be.