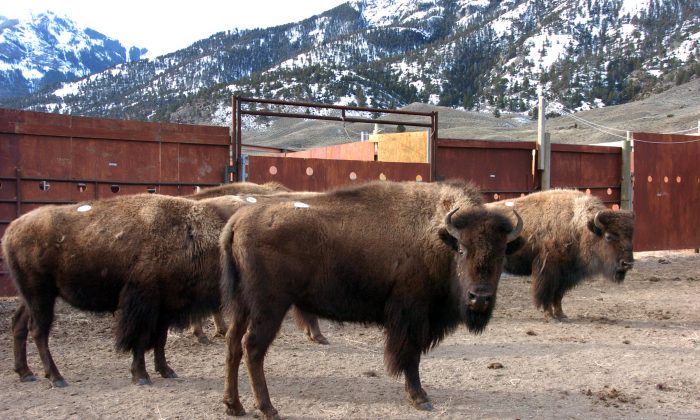 GARDINER, Mont.—Yellowstone National Park started shipping many of its famous wild bison to slaughter Wednesday to drive down the size of the park’s herds and respond to concerns by the livestock industry over a disease carried by the animals.

Thirty animals have been shipped to slaughterhouses, and officials plan to send an additional 63 in the next few days. The bison were weighed and tested for disease for research purposes, and the remaining animals were crowded into holding pens to await shipment.

The park’s actions are driven by an agreement in 2000 with Montana officials that requires it to control its bison herds. The meat will be distributed to American Indian tribes that traditionally subsisted on bison.

“Nobody here wants to be doing this,” park spokeswoman Jody Lyle said after the bison were prodded into trailers for shipment. “It’s time for a change.”

About 150 of the animals have been captured this winter trying to migrate out of the park in search of food at lower elevations in Montana. Ranchers worry about bison infected with brucellosis, a disease that can cause cattle to abort their young.

There have been no recorded bison-to-cattle transmissions of brucellosis, and critics say the slaughters are unnecessary. Captured bison that test negative for it are not spared.

“This is not OK. It’s really that simple,” said Stephany Seay with the Buffalo Field Campaign, a bison advocacy group.

Rick Lamplugh said he moved last May from Oregon to the small town of Gardiner, at the northern entrance to the park, in large part for the wildlife viewing opportunities. The park and state agencies need rethink their policies on bison so they can be “treated like any other wildlife,” he said.

Tens of millions of bison, also known as buffalo, once roamed North America. Commercial hunting drove the species to near-extinction in the late 1800s before conservationists—including former President Theodore Roosevelt—intervened when only dozens were left.

Yellowstone is home to one of the few remaining wild populations. Millions of tourists visit the park each year to see the animals, a top attraction at the nation’s first national park. The animals also are the symbol of the National Park Service.

Since the 1980s, worry over brucellosis has prompted the killing of about 8,200 park bison, most of them sent to slaughter. In recent years, state, federal and tribal agencies have tried to emphasize public hunts that occur just outside the park’s boundaries.

Hunters so far this winter have killed more than 400 of the animals, said Andrea Jones with Montana Fish, Wildlife and Parks. That’s the most since 1989. The vast majority were shot by members of American Indian tribes that have treaty hunting rights in the Yellowstone region.

Detracting from the hunt’s success has been an unprecedented number of animals that were merely wounded and retreated to the park after being shot.

Up to 50 wounded bison were killed by state and federal wildlife agents, Jones said.

The park had 4,900 bison at last count, well above the 3,000 dictated under the agreement. Park officials set a goal this year of removing 600 to 900 of the animals. More shipments to slaughter are possible in coming weeks if large groups of bison move into Montana, although a mild winter has reduced this year’s migration compared with previous years.

During the past decade, Montana Gov. Steve Bullock and his predecessor moved to allow bison into areas adjacent to the park. Yellowstone administrators have supported those efforts, but they say they are bound under the 2000 agreement to keep the bison herds in check.

Alternatives—such as transferring some Yellowstone bison to lands outside the park—are under consideration but unlikely to take effect soon. Park workers are holding back from slaughter 57 bison calves and yearlings for potential future placement elsewhere if the opportunity arises, park spokeswoman Amy Bartlett said.

If that doesn’t happen, the animals will be slaughtered, she said.