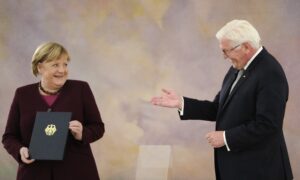 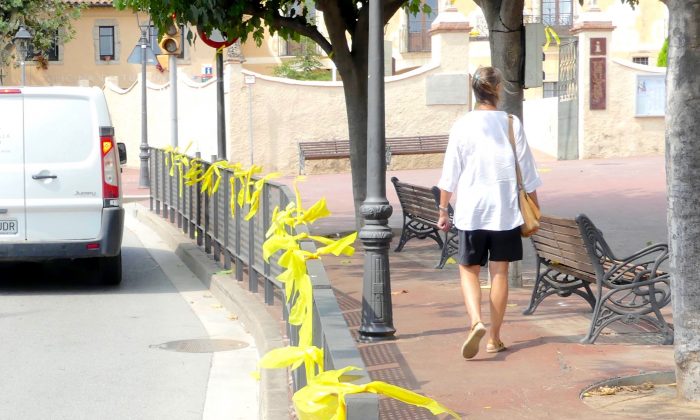 Yellow ribbons decorating railings in a street in Alella, near Barcelona, Spain, on Aug. 30, 2018. (Anna Llado/Special to The Epoch Times)
Europe

BARCELONA, Spain—Wearing white jumpsuits, masks, and goggles, a determined group of around 80 people gather in the Catalan village of Cabrera de Mar, around 18 miles northwest of Barcelona.

The nightly outing is one of the latest attempts of the self-styled “cleaning brigade” that seeks “to free the region of Catalonia from the pro-independence movement.”

Their targets: Yellow ribbons that have decorated the streets and public places as symbols of solidarity with secessionist leaders who were jailed during the region’s fight for independence last year.

The battle over the yellow ribbons, dubbed by some the “yellow ribbon war,” has intensified this summer.

The campaign to clean up the streets was fuelled by the center-right Ciudadanos party, which received the most popular votes in Catalonia’s 2017 elections.

According to the party’s leader, Inés Arrimadas, the government, formed by a coalition of pro-independence parties, has the obligation to maintain neutrality in public spaces, but since “it’s doing nothing,” the pro-Spain party is taking matters into its own hands.

José Casado is the spokesman of the “cleaning brigade” that organizes its activities by using communication apps such as Whatsapp and Telegram. The initiative consists of 18 groups, each formed by around 30 people, working on the sly with secret maps showing where the ribbons are.

“Public spaces must be neutral; the streets belong to everyone,” Casado said.

“On their balcony or at home, separatists can put whatever they want. But not in public spaces.”

“Public spaces shouldn’t be neutral,” Cruanyes said. “Democracy should allow us to express our ideas and to dangle yellow ribbons or banners asking for the release of political prisoners.

“We will put up yellow ribbons peacefully as many times as necessary,” he said, implying that the battle between the groups will continue. “Removing the yellow ribbons goes against freedom of expression.”

But neither side is committing any crime, according to Spain’s attorney general, María José Segarra.

“Both are covered by freedom of expression,” Segarra said.

Nonetheless, the pro-independence Catalan President Quim Torra, who always wears a yellow ribbon on the lapel of his jacket, urges police to take action “against the aggressive groups” that remove the ribbons. Several people have already been identified and could face hefty fines, according to the regional government.

The tensions have led to violence, at times.

A man was arrested on Aug. 29 for punching a woman who he thought was removing ribbons from a park fence. During a protest to condemn the aggression, a cameraman from a Spanish TV channel was attacked because demonstrators thought he was a separatist.

The battle for yellow ribbons has intensified ahead of an eventful autumn expected in Spain.

The trials of secessionist leaders currently in jail are also expected to start in the fall. There are nine leaders in prison, while another seven, including former Catalan President Carles Puigdemont, are in self-imposed exile. Puigdemont lives in Waterloo, Belgium, where he continues his political activism.

Another key date is Sept. 11, the National Day of Catalonia, when the Catalan National Assembly organizes a massive annual rally. Last year, 1 million people marched for independence during the event.