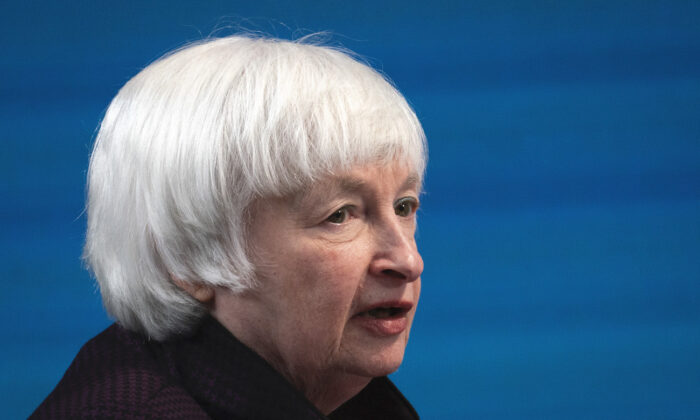 Yellen Backs Down on IRS Snooping on Americans’ Bank Accounts

Secretary of the Treasury Janet Yellen has relented in response to backlash over a controversial proposal by Democrats that would have allowed the IRS to gain information from any American bank account with more than $600 of activity in a year.

The measure initially came to light as a part of Democrats’ $3.5 trillion reconciliation bill. Trying to head off concerns from moderates, Democratic leaders and rank-and-file lawmakers have desperately marketed the bill as being completely paid for with no substantial effect on the deficit or national debt.

One proposal to achieve that end was the IRS measure.

Critics of the plan originally presented it as allowing the IRS to gain information on individual transactions totaling more than $600, which Yellen has called a “mischaracterization.”

She indicated that the plan has a much larger scope. According to Yellen, the measure would have allowed the IRS to retrieve all information from bank accounts with more than $600 total activity per year, rather than information on individual transactions. In the face of sharp backlash from citizens and corporate entities, Yellen has announced that the threshold will be raised to $10,000, but that the program will remain in the bill.

Despite immediate backlash, Speaker of the House Nancy Pelosi (D-Calif.) and Yellen have adamantly defended the planned IRS overhaul.

Yellen, the former Chairwoman of the Federal Reserve who took control of the Treasury in January, said the measure is designed to target wealthy Americans who hide income from the IRS. Because of the measure, Yellen said the IRS will be able to collect more taxes from the wealthy and close the “tax gap.”

Now, Yellen has somewhat changed course, supporting a raise in the reporting threshold from $600 to $10,000.

While still supporting the broad goal of closing the so-called “tax gap,” she relented on key aspects of the program.

“Under the current system, American workers pay virtually all their tax bills while many top earners avoid paying billions in the taxes they owe by exploiting the system,” she said. “At the core of the problem is a discrepancy in the ways types of income are reported to the IRS: opaque income sources frequently avoid scrutiny while wages and federal benefits are typically subject to nearly full compliance.”

“This two-tiered tax system is unfair and deprives the country of resources to fund core priorities.”

However, responding to concerns that the program would target middle class and low-income Americans, Yellen announced several changes to the original measure.

Foremost, the reporting threshold will be raised to $10,000, addressing a key concern from critics who considered $600 to be too low to merit IRS snooping.

Yellen also announced an “exemption” from the measure “for wage earners like teachers and firefighters.” It is not yet clear whether this exemption will extend to other middle class wage earners in the private sector.

“Today’s new proposal reflects the Administration’s strong belief that we should zero in on those at the top of the income scale who don’t pay the taxes they owe,” Yellen said.

She concluded, “We will continue to work with leaders in Congress to enact this important measure to level the playing field for workers and small businesses, and raise revenue to build our economy back better.”

Republicans have criticized the proposal since it became public.