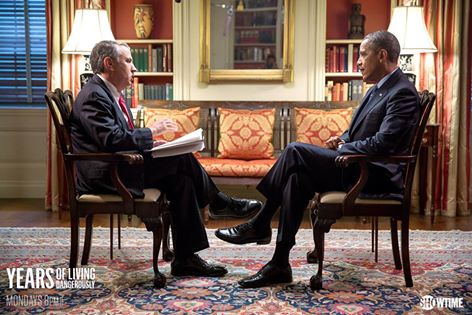 Years of Living Dangerously Season 2? Will Showtime Series Be Renewed or Canceled?

Years of Living Dangerously season 1 wraps up on Showtime on June 9 and viewers are wondering whether there will be a season 2.

The documentary television series focuses on climate change by having celebrity investigators and well-known journalists highlight the impact of climate change across the world.

The series premiered on April 13 with an episode in which Cheadle reported on the severe droughts in the southwest United States; Ford visited Indonesia to learn about slash-and-burn deforestation; and Friedman investigated how the drought contributed to the civil war in Syria.

Other episodes have featured Somerhalder following preacher Rick Joyner as she visited congregations in North Carolina trying to persuade them to join the fight against climate change; Stahl meeting with U.S. Secretary of State; and Alba following the Climate Corps fellows as they worked with U.S. companies to better manage sustainability and energy efficiency.

There’s been no word yet on a season 2, but it doesn’t seem likely that there will be one.

The ratings have been so low that the show hasn’t been on the top 100 cable shows for its night for most of the season.

Showbuzz called the ratings “dismal,” coming in at about 45,680 households for one of the episodes. At the same time, the free full episode 1, available on YouTube through Showtime, has gotten over 500,000 views.