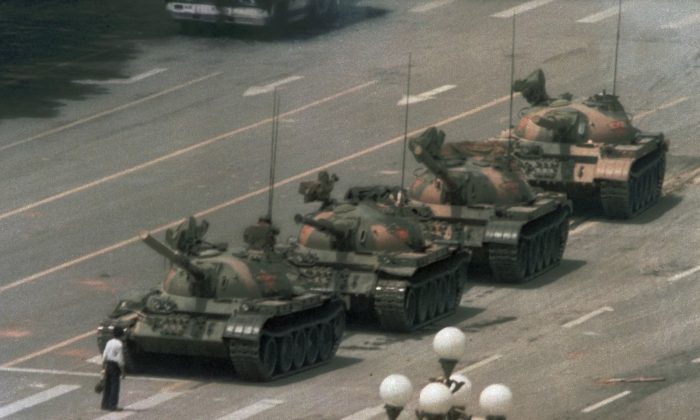 This image is how most of the world remembers the Tiananmen Square Massacre that is now entering its 27th year anniversary. The Chinese regime has been trying to have people forget about it by censoring discussions and having 1989 banned from textbooks and Chinese websites. (AP Photo/Jeff Widener)
China

Rowena Xiaoqing He, Tiananmen Exiles: Voices of the Struggle for Democracy in China, Palgrave Macmillan, $29, 240 pages

For most people familiar with it, the meaning of the “Tank Man” photograph is clear: the brave individual standing up to a repressive state.

For Fang Zheng, a Chinese student activist who is now in a wheelchair, the photograph itself was a tool of repression.

“I was confronted with that Tank Man photo regularly” as he lay in a hospital bed, soon after the massacre of June 4, 1989, recovering from having his legs crushed by a tank speeding down the Avenue of Eternal Peace.

Fang Zheng was one of the students who protested against official corruption and calling for greater democracy and freedoms. Hundreds of thousands of idealistic young students like him had filled Tiananmen Square, in the heart of Beijing, since April. Probably close to 3,000 of them, according to the most recent research, were violently killed on June 4, 25 years ago to this day.

“They put a lot of pressure on me. The officials held up the photo and said: Look at this. The tank is not crushing him. If you got crushed, you must have been violent.”

Fang Zheng, a student protester whose legs were crushed by a tank after the June 4 massacre, spoke about his experience at Harvard University on April 26. (Matthew Robertson/Epoch Times)

They were lies, and the officials’ attempt to ram them into Fang’s head anguished him. On the morning of June 4, Fang had actually turned to save a female student who had fainted from the chemical weapons soldiers fired at them. Most of the shooting had already petered out, and he and a few others were trying to walk home. He hurried over to pick her up and push her out of the way of the tank, which then rumbled right over his legs.

Fang was an athlete denied participation in the Paralympics in China, because he would not lie about how he came to be disabled. He was put under house arrest and isolated, and discriminated against in his workplace and who he could speak to. If he simply lied on behalf of the regime, he could have been spared some trouble. “That lasted for 20 years—a struggle with officials over the nature of the truth.”

Fang Zheng spoke about his experiences at Harvard University in April, at a panel organized by another survivor of the Tiananmen movement, though one that never made it to Beijing.

Rowena He was a teenager in Guangdong in 1989. She rode forth on her bicycle into the night to gather with others concerned by the news from Beijing, with the extraordinary and moving support of all her family members. Her little brother solemnly stuffed five yuan (80 cents) in her dress pocket and said, “Get yourself a soft drink if you get thirsty.” No one knew how big the risks of gathering might be.

Nine years later she left China for Canada, before relocating to Harvard University, where she teaches a course on the protests and their violent suppression.

Her new book, Tiananmen Exiles, is a record of the experiences of some of the key figures in the student movement, while also conveying her own story.

The core of the book is formed by probing interviews with Wang Dan, Shen Tong, and Yi Danxuan, all of them student leaders. She demonstrates their personal struggles through the political violence that reshaped their lives. The Tiananmen movement was the formative event in the lives of all those people, as it was for Ms. He.

The ripple effects of repression are noted almost in passing, in the case of Cheng Renxing, a 25-year-old graduate of the People’s University of China who was shot to death while trying to leave the square on June 4. His father, a farmer in Hubei Province, was an emotional wreck and died six years later.

“Cheng’s mother tried to hang herself at home,” Ms. He writes, “but was saved by her 10-year-old grandson, who used his little body to hold up his grandmother for an hour until adults came to rescue her.” Children in that position would often not be told about the anguish and suffering of a family who lost loved ones to government bullets.

Ms. He explains precisely, in fact, how the Party sought to undermine the bonds of family, attempting to insinuate itself between father and son to enhance political and ideological control. For Chinese that are perceived to be a threat, the Party has, throughout its rule, attempted to exert mind control by isolating and neutralizing the sublime, or even merely human, impulses in its subjects, replacing them with unquestioning loyalty and obedience to it.

Shen Tong explains how his father, an official in the Beijing municipal government, was pressured to spy on his son. In what was clearly a pained exchange, his father said to his mother: “I have always done what the Party has asked of me, but I will never betray my son.”

The human spirit, the yearning for truth, and resistance to the worst instincts of the regime, thus prevail, in spite of every attempt the Chinese Communist Party has made. Another book, The People’s Republic of Amnesia, written by Louisa Lim, a former NPR correspondent, is devoted to exploring precisely that attempt.

Lim has traveled around China, and to Taiwan and Hong Kong, to collect a range of illuminating backstories about the people around the protest movement and the massacre. Her overarching theme is how the Party has whitewashed the real history and enforced amnesia on the populace. The same methods of social pressure and control as discussed by Ms. He pop up here—it’s the Communist Party’s stock in trade, and there are only so many courageous people who are willing to put ideals above practical concerns and struggle against forgetting.

Lim early in the book gives an account, through the eyes of Chen Guang, one of the soldiers from the countryside, of the actual clearing of the square. His army was snuck into the capital in civilian clothes. They hauled the machine guns and bullets into the Great Hall of the People before changing into military clothing and gunning down the waiting students.

Other details Lim digs up include details on the refusal of one high-level military commander to participate in the crackdown, and the deep fears that there might even have been a mutiny among the troops.

Other parts of her book, like Ms. He’s, deal with student accounts of the crackdown and the experiences subsequently. There is the extraordinary character of Zhang Ming, for example, one of the student leaders. After the massacre, Zhang got into business. But once he was successful he had hundreds of millions of dollars stolen from him by government agents, who feared someone like him getting wealthy. Then he was thrown into prison for seven years. Now he lives on residual income, subsists on milk—no solid foods—and requires cupping therapy on his forehead to alleviate his physical pain.

The final chapter of Lim’s book recounts another massacre that took place in China on June 4, in the city of Chengdu, in the southwest. There, as in Beijing, soldiers opened fire on unarmed protesters who had filled the center of the city. The story of that massacre, and how little known it is even to this day, demonstrates the success of the Chinese Communist Party’s campaign to repress and shut away all traces of its crimes. But clearly, that strategy only works until it doesn’t.