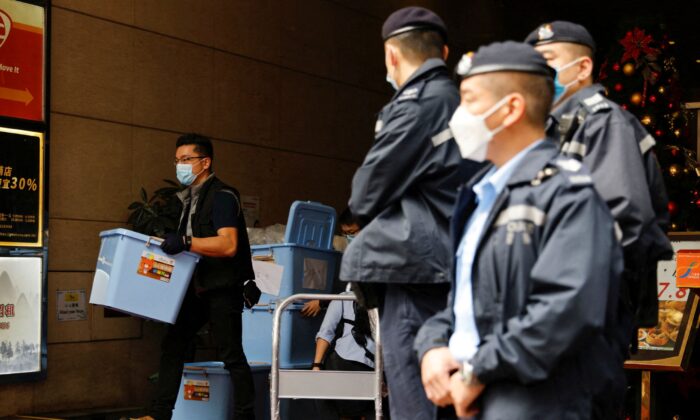 A police officer collects a box of evidence after a search at the office of Stand News in Hong Kong, on Dec. 29, 2021. (Tyrone Siu/Reuters)
Thinking About China

Year of Death for Press Freedom in Hong Kong

The year 2021 will go down in the history of Hong Kong as a “year of death” for the once-vibrant civil society.

Within a short span of a year, more than 60 pro-democracy groups, news media, and trade unions were strangled to death by the draconian national security law (NSL) enacted by the Chinese Communist Party (CCP) in 2020. Stand News, which made the headcount in an October 2021 issue, became one of the latest casualties at the very end of the year.

The arrest of six senior editors and directors of Stand News, coupled with the freeze of more than HK$61 million (roughly US$7.8 million) in assets, led to the immediate death of the web-based news outlet. This blatant suppression of press freedom by the Hong Kong Special Administrative Region (HKSAR) government immediately made headlines in newspapers all over the world and drew heavy criticism from many countries.

In the HKSAR media landscape, most of the traditional media outlets (newspaper, radio, and TV) are conditioned either to adopt a pro-Beijing stand or to refrain from criticizing the CCP. Apple Daily was the only exception, which led to its eventual death in June 2021. After subduing the traditional media, the Beijing regime’s ax began to fall on the web-based ones.

Stand News is the first web-based news outlet in Hong Kong. Its predecessor was the House News, which was set up in 2012 by Tony Tsoi, an electronic industrial entrepreneur. By 2012, the local media already had become very much plagued with self-censorship. Tsoi refused to curry favor with the CCP authority, but decided instead to work out a new platform to sustain press freedom in Hong Kong. His model proved a success, and very soon, the House News became a highly sought-after source of unfettered news analysis and commentaries.

Its success naturally invited repression from the CCP. In early 2013, the city was simmering with anger over Beijing’s repeated denial of universal suffrage, a solemn promise it made to Hongkongers before the handover in 1997. Law professor Benny Tai proposed an Occupy Central (OC) movement, while Tsoi publicly declared his support and became one of the movement’s 10 prominent individuals who defied Beijing.

Fearing that the influential House News’ pro-democracy stand would fan the OC movement, the CCP placed Tsoi under house arrest and detained him for a week in China, forcing him to agree to shut down his news outlet and to refrain from joining the OC movement. Tsoi was forced to succumb because, at that time, he was the senior director of Varitronix International Ltd., a major firm that manufactured digital consumer products in China. Tsoi told me that he was duty-bound not to put his other directors in harm’s way. That led to the sudden closure of House News, citing unprofitability as an excuse, and his subsequent absence in the OC movement.

After keeping quiet for some time, the worsening media milieu prompted Tsoi to revive his dream of creating a media outlet that could withstand the CCP pressure. Thus, he created Stand News in 2014.

In the inaugural message of Stand News, Tony said the following (a rough translation of the original statement):

“House News is dead, but Stand News is born. In Hong Kong, in 2014, we have a responsibility. In House News’ unnatural death, we should be held accountable because we underestimated the challenge in running an independent media and the pressure from those who want to stifle it. However, we do not resign to it, nor abandon our aim. We did not give up the dream of establishing an independent media. After several months of soul searching, we stand up again. Stand News is the answer.”

The largest difference between House News and Stand News is that no one owns the company’s interests anymore. To ensure that Stand News isn’t under the control of any individual and can continue to survive, its three patrons, through a trust arrangement, waived the economic interests of the shares and the right to dispose of them. The trust would hold the Stand News equity for a long time and none of its patrons have the right to transfer the company’s shares.

Clearly, Tsoi tried to create a modus operandi that would protect Stand News even when its owners were in deep trouble. However, this only worked until the national security law was implemented by Beijing. With the NSL taking precedence over all other laws in the HKSAR (Article 62 of the NSL), the trust arrangement was easily scrapped, as proven by the media outlet’s death.

The inaugural message also made the pledge that “we defend freedom of expression, diversity and inclusiveness,” and that we “insist on reporting the truth and not distorting the facts because of our own positions. We believe in the importance of editorial independence. … We believe that the responsibility of the media is to keep a watch on those in power, and to continue to speak out for the powerless.

“Stand News … takes Hong Kong as its base, and firmly believes that the future of our city should be decided by the Hong Kong people. Democracy, human rights, freedom, the rule of law and justice are the core values of Hong Kong that we are committed to upholding. … Guarding the home [Hong Kong] is our position and we’ll never back down.”

Stand News lived up to its founder’s dream. Paid subscriptions and donations grew as press freedom in the traditional media continued to shrink. Many Hongkongers shared its values and made donations to keep it alive. Being a target of the CCP proved that it fulfilled its mission.

Following the death of Stand News, another web-based outlet, the InmediaHK, announced its dissolution right away.

Soon after, Citizen News announced that it would cease operations. The influential web-based media was set up in 2017 in a bid to counter diminishing press freedoms. Like Stand News, it enjoyed popular support from the general public.

To show solidarity with Stand News and other media that have shut down, and to curb Beijing’s incessant moves to silence Hong Kong, the international media community should come together to boycott the coverage of next month’s Beijing Winter Olympics.