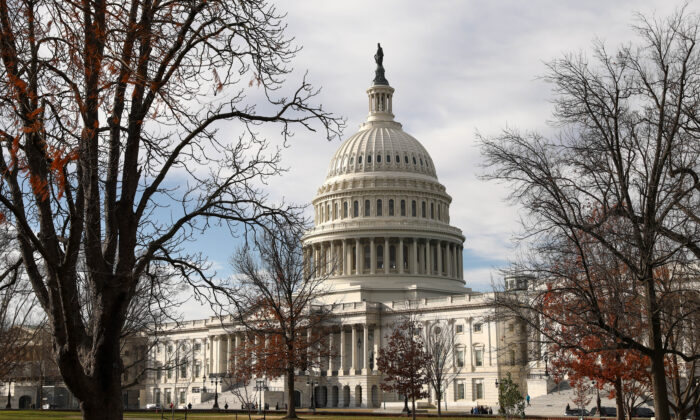 WASHINGTON—When Congress headed home for Christmas, it ended a year notable for President Donald Trump’s success in getting conservative judges confirmed by the Republican Senate and, conversely, his rapid-fire impeachment by House Democrats.

The contrast between the two chambers of Congress was epitomized Dec. 18 as the Republican-led Senate voted to confirm one judge and end debate on 11 others, bringing the total for successful Trump judicial nominations to 187 in three years, including two members of the U.S. Supreme Court.

By comparison, the Senate confirmed 329 of President Barack Obama’s judicial nominations in eight years, also including two members of the Supreme Court.

If Trump is reelected and continues his current pace of successful judicial appointments through 2024, the federal courts could by then include more than 400 lifetime appointments of conservative judges, including quite possibly three Supreme Court nominations and a 6–3 conservative majority on the nation’s highest tribunal.

On the House side, Dec. 18 included long hours of intense debate on two articles of impeachment—for “abuse of power” and “obstruction of Congress.” With 233 Democrats and only 197 Republicans, the outcome was never in doubt.

Both articles were approved easily, making Trump only the third impeached chief executive since the nation’s founding more than 200 years ago.

Republicans voted unanimously against both articles, joined by two Democrats on the first and three on the second. As this story is being written, the next step in the impeachment process is a trial in the Senate.

When the trial will convene, though, is unclear, as Speaker of the House Nancy Pelosi (D-Calif.) vowed following the impeachment votes to withhold the approved articles from the Senate until the upper chamber adopted “fair” rules.

The Senate Republicans’ consuming focus on confirming Trump’s judges and the House Democrats’ obsession with investigating and ultimately impeaching the president shaped the entire year in Congress.

As a result, Congress delayed doing its most essential jobs—approving an annual budget, ensuring national defense, and protecting America’s international interests—until the final moments of the 11th hour.

House Democrats began the year by introducing a host of radical proposals with little chance of being approved in the Republican Senate.

Initially, Pelosi sought to keep her Democratic charges focused on the legislative agenda, while leaving it to four House committees—including the panels on oversight, judiciary, intelligence, and foreign affairs—to investigate Trump on a lengthy list of alleged wrongdoing.

But when special counsel Robert Mueller failed by the end of his investigation in July to produce proof that Trump colluded with Russia in 2016 or obstructed the two-year investigation, House Democrats focused on little else but impeachment for the rest of the year.

In a remarkable near-round-the-clock week of negotiation in the closing days of the session, Senate and House negotiators led by Senate Appropriations Committee Chairman Richard Shelby (R-Ala.) and House Appropriations Committee Chairman Rep. Nita Lowey (D-N.Y.) agreed Dec. 12 on a nearly $1.4 trillion discretionary spending package. (The rest of the $4.2 trillion budget covers entitlements such as Medicare, and interest on the national debt.)

The package deal wrapped 12 regular appropriations bills that should have been approved by Sept. 30 into two groups of six each. The passage averted another government shutdown starting on Dec. 20, when the year’s second temporary spending resolution expired.

“Bipartisan cooperation has made this possible,” Shelby said on Dec. 19, as the Senate completed action on the deal. The House approved the deal on Dec. 17.

“Chairwoman Lowey and Ranking Member [Rep. Kay] Granger (R-Texas) on the House side; Vice Chairman [Sen. Patrick] Leahy (D-Vt.) and myself on the Senate side—I believe the four of us have shown once again that, if given the opportunity, we will find a bipartisan path forward to get the job done,” Shelby said.

On the national defense side, the deal included multiple provisions sought by Trump, including maintaining his authority to transfer previously approved military spending to help fund construction of the wall on the U.S. border with Mexico.

But the deal contained much on the domestic side that distressed conservatives. Sen. Bill Cassidy (R-La.), for example, pointed to the deal’s repeal of two Obamacare taxes.

“Now we will have Obamacare without the revenue to pay for it. What is worse is that we gave up these taxes without any reforms to help curb the growth of health expenditures. This is a gift to everyone who wants higher insurance premiums and more spending on health care,” Cassidy said.

“There are reforms that we could institute that would allow us to repeal these taxes but nonetheless still control health care costs,” he said. But the 11th hour rush to reach a spending deal precluded action on such reforms, for now.

Sen. Mike Lee (R-Utah) told the Senate on Dec. 19 that he opposed the deal because “these bills are written behind closed doors, by a small handful of leaders from the two parties—thousands of pages spending trillions of dollars and released to public scrutiny within a few hours of a government shutdown.”

“This we call ‘bipartisanship’ … these spending bills are a fiscal dumpster fire. Discretionary spending will be at record-high levels in nearly every category. This omnibus will add $2.2 trillion to the national debt over the next decade.”

“We should be talking about how to address the budgetary mess we are in, not pressing the gas on our unsustainable fiscal trajectory, which is exactly what this bill does,” he said.

The House’s last vote of 2019 approved Trump’s proposed United States–Mexico–Canada trade agreement signed in 2018. But the Senate likely won’t vote on it until it completes the impeachment trial in 2020.

Significant reforms are rarely approved by Congress during election years, so additional judicial and executive branch confirmations and keeping the government open during the 2020 campaign will likely be the most significant actions on Capitol Hill next year, unless a Supreme Court vacancy occurs. Then Trump and McConnell would move quickly to fill the vacancy, despite any Democratic protests.