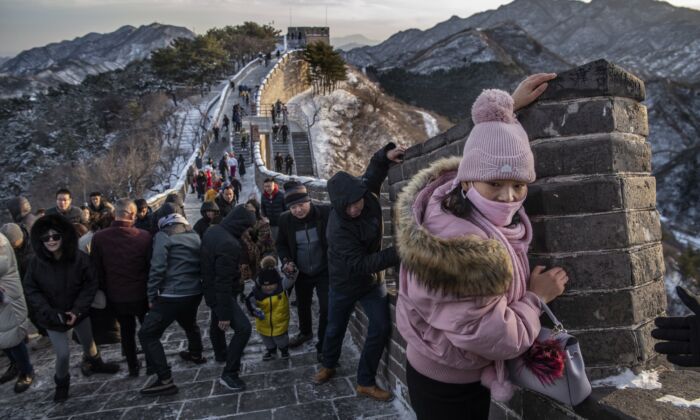 Tourists struggle to climb in the wind on an icy section of the Great Wall at Badaling in Beijing, China, on Nov. 30, 2019. (Kevin Frayer/Getty Images)
Chinese Regime

Year in Review: For Communist China, the Worst Is Yet to Come

This article is part of a special Epoch Times series reviewing the year 2019.
By Leo Timm

Not since 1949—the year the Chinese Communist Party (CCP) seized power and established a Leninist dictatorship over the world’s most populous country—has the regime faced such challenges as it does at the end of 2019.

So much so that Arthur Waldron, a prominent China historian at the University of Pennsylvania, says the regime is now in the process of “disintegration.”

On Oct. 31, the elite Party conclave, the Fourth Plenum of the CCP Central Committee, concluded on a note of outward calm. An official communique stressed the guiding role of the Party in all public spheres and called for the upholding of “Party central authority and centralized and unified leadership” under Chinese leader Xi Jinping.

Behind closed doors, however, Xi has found himself mired in a political crisis that has only intensified in recent months, according to regime insiders. Even after years of centralizing authority, and waging an anti-corruption campaign to rid the Party of Xi’s rivals, informal resistance to Xi’s leadership remains strong. Insiders say that Xi’s directives are often prevented from leaving the gates of Zhongnanhai, the Party’s headquarters.

In December 2018, Xi met with U.S. President Donald Trump on the sidelines of the G-20 summit in Argentina, where the two leaders negotiated a truce to the ongoing trade war. In the opening months of 2019, U.S. and Chinese trade representatives made solid progress on a deal, reaching agreement on more than 90 percent of the terms, according to U.S. officials. But in May, Beijing suddenly reneged on the draft deal, prompting additional tariffs from the Trump administration.

China watchers suggest that the influence of hardliners within the CCP was responsible for derailing the trade talks.

On Dec. 13, U.S. and Chinese officials announced that they had finally reached a “phase one” trade agreement. But in the words of U.S. Trade Representative Robert Lighthizer, the success of the deal will depend on whether reformers or hardliners have the upper hand in Beijing.

Paradoxes of Power and Profit

The Chinese economy, exacerbated by the effects of the U.S.–China trade war, has seen a steady deterioration in 2019. China’s National Bureau of Statistics recently produced figures showing that GDP growth had fallen below 6 percent this fall—the worst in more than 30 years. But according to Chinese economists, such as Renmin University’s professor Xiang Songzuo, the real rate of growth is likely even lower, if not negative.

Beijing is hard-pressed to square its dreams of a healthy private sector with the political weight of the Communist Party’s state-owned enterprises (SOE). Private companies and their profits are being cannibalized to feed anemic state firms. Multiple large SOEs have filed for bankruptcy, and China’s unemployment rate, which is considered a state secret, is estimated to be in the double digits.

Bank runs throughout China reflect the poor state of the Chinese financial system, which is kept afloat on bad debt and by exporting excess industrial capacity to countries participating in the “One Belt, One Road” (also known as Belt and Road) initiative.

On the international front, the Party’s mercantilist model of trade has been disrupted by accelerating outflows of capital and manufacturing. Under the leadership of the Trump administration, the United States has stepped up efforts to confront and understand the threat that comes from Beijing.

Outrage at the CCP’s vast human rights abuses has gone hand in hand with China’s economic decline. In June, the London-based China Tribunal, chaired by Sir Geoffrey Nice QC, concluded that prisoners of conscience, principally practitioners of the banned spiritual practice Falun Gong, were being murdered en masse for their organs in Chinese hospitals, with “no evidence of the practice having been stopped.”

On Oct. 30, U.S. Secretary of State Mike Pompeo drew a clear distinction between China and the Communist Party, describing the latter as a “Marxist-Leninist Party focused on struggle and international domination.” He also recently said the Chinese people seek to live in a free society and are rejecting the Party’s rule.

Meanwhile, incidents such as the Chinese regime’s reaction to a pro-Hong Kong tweet by the general manager of a popular NBA team have raised broad awareness of the CCP’s threat to free speech and other liberties beyond China’s borders.

‘Revolution of Our Times’

Thirty years after the Party violently suppressed pro-democracy student protesters in Beijing’s Tiananmen Square, it’s grappling with similar social unrest in the city of Hong Kong, as well as growing unrest throughout China.

Hongkongers, fearful of the CCP’s ever more assertive attempts to extinguish the city’s autonomy, have taken to the streets in largely peaceful protests since June calling for genuine universal suffrage, among other demands.

Despite efforts by the regime to smear the protesters, the movement is beginning to spill over into mainland China. In November, when townspeople in the city of Maoming, Guangdong Province, clashed with police over an unwanted construction project, they adopted the cry of the Hongkongers: “Revolution of our times.”

The Maoming protests are but the tip of the iceberg in a growing maelstrom of social unrest threatening the downfall of the CCP. On top of corruption and abuse of power, public anger also stems from natural calamities, such as rising costs of pork after African swine fever ravaged China’s pig herds.

Slogans voiced by the Hong Kong protesters have also struck at the very core of the Chinese regime. In addition to the famous “five demands, not one less,” growing numbers of Hongkongers now raise banners proclaiming that “Heaven will destroy the CCP.”