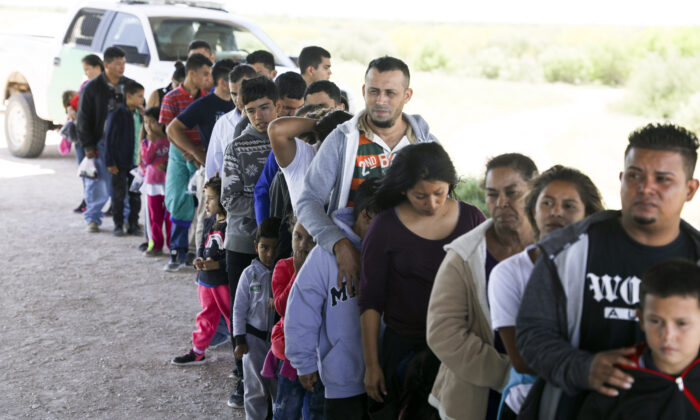 WASHINGTON—The year began with the president declaring a national emergency at the southern border.

The border crisis escalated, and in May, nearly 133,000 illegal aliens were apprehended by Border Patrol, with a further 11,000 presenting at ports of entry without legal documentation.

However, the dire situation in overcrowded Border Patrol stations was not alleviated until July, when Congress appropriated emergency funds for humanitarian relief.

By the end of fiscal 2019, almost 1 million people had entered the United States illegally, nearly double the number in fiscal 2018.

More than 600,000 of them were either individuals within a family unit or unaccompanied minors—both vulnerable populations that often arrived sick and required more care than Border Patrol was set up to provide. Acting Commissioner of Customs and Border Protection Mark Morgan said Border Patrol undertook an average of 70 to 80 hospital visits with illegal aliens every day just along the southern border in fiscal 2019.

By December, illegal entries had decreased to 42,000 for the month, following a steady decline since the peak in May.

The real seachange happened south of the border, at the behest of the Trump administration: The Migrant Protection Protocols took effect, Mexico tightened up its enforcement efforts, and the United States forged agreements with the Central American nations of Guatemala, Honduras, and El Salvador.

The threat of tariffs in June spurred Mexico to cooperate.

“It’s a sad day in America when the government of Mexico is doing more to secure our borders than the members of Congress—because they haven’t done anything,” said Tom Homan, former acting director of Immigration and Customs Enforcement (ICE).

In July, asylum-seekers became ineligible for asylum benefits in the United States if they didn’t apply for asylum in a safe third country, including Mexico, on their way here. The ruling was initially blocked nationwide, but subsequently allowed by the Supreme Court.

“The steps that [the administration] took were effective. And they had to be done because there was no end in sight,” said Jessica Vaughan, director of policy studies at the Center for Immigration Studies.

“It morphed from a phenomenon of mostly Central Americans with a few Cubans and Haitians, to a global phenomenon with people coming from Africa and India and China, and starting to come over the northern border. So it was not a moment too soon to get that controlled.”

Morgan said that since this time in 2018, Border Patrol has seen a 200 to 300 percent increase of illegal aliens coming from outside the continent.

Instead of being given an ankle bracelet and released into the United States, under the Migrant Protection Protocols (MPP), illegal aliens may be sent back to Mexico to await their immigration court proceedings.

If their claims are deemed meritorious by an immigration judge, they will be granted legal status and benefits to live and work in the United States. If not, they’ll be sent back home, which, under the new agreements with Central American countries, has become easier.

“They needed to find a way to avoid simply releasing everyone into the United States,” Vaughan said. “People are getting the message that the party’s over.”

The MPP officially started in San Ysidro, California, in January and has added locations along the southern border throughout the year, the latest being Nogales, Arizona, in the first week of December.

Between January and November, 56,004 people under the MPP had filed immigration cases, according to data by the Transactional Records Access Clearinghouse (TRAC) at Syracuse University.

Of those, 24,231 cases are complete, with 117 people being granted asylum or other legal status and 15,441 being issued a removal order. Another 8,099 fell under a “terminate proceedings” category, which likely means they withdrew their application, but TRAC didn’t respond to a request for clarification.

Almost 22,000 are still waiting for their first hearing, while 17,136 failed to show up at their last hearing, according to TRAC.

“The big problem that still remains is that now there’s hundreds of thousands of people who got in for the last couple of years, who are not necessarily applying for asylum even—they’re just here,” Vaughan said.

“They’re clogging up the court system. Some of them have work permits; others are working illegally, and unless they get arrested for something else, the chances that ICE is going to be able to remove them are very slim.

“It’s the group that the anti-enforcement advocacy groups are going to try to set up for the next amnesty.”

Overcoming a barrage of judicial rulings against his policies, the Trump administration won a few big rulings in the Supreme Court this year—including upholding the use of military funds to build border fencing, allowing for the detention of criminal aliens prior to deportation, and allowing for a safe third country rule for asylum-seekers to continue while it works its way through lower courts.

A court in Texas has since issued another nationwide injunction against military funds being used for border wall construction. Ninety-six miles of border fencing has been erected so far under Trump.

An appeals court in May allowed for the MPP program to continue after a nationwide injunction blocked the program in April.

In July, an appeals court allowed the administration to penalize sanctuary jurisdictions by withholding some funding to areas that refuse to cooperate with federal immigration authorities.

Several courts blocked an expanded public charge rule the administration sought to enact in October. The rule seeks to deny immigration benefits to individuals who would likely become primarily dependent on the government for subsistence, by receiving assistance such as food stamps or Medicaid. It doesn’t apply to refugees and asylum-seekers.

Two appeals courts subsequently lifted most of the nationwide injunctions, but the New York injunction is still in effect.

The Supreme Court is currently considering the case of the Deferred Action for Childhood Arrivals (DACA) recipients, who were given amnesty from deportation in 2012 by then-President Barack Obama in the form of an executive order. The Trump administration rescinded the executive order in September 2017, but the program has remained open while it works its way through the court system.

Expect more jostling in the courts in 2020, including the DACA decision and a potential birthright citizenship battle.

Although the crisis at the border has diminished somewhat, it’s unlikely Congress will do anything in 2020 to solve it, predict both Homan and Vaughan.

“There’s still 40,000 people a month coming across that border, and Congress has done nothing to address it,” Homan said.

He’s concerned that wording in the newly inked appropriations bill will cause another surge of unaccompanied minors crossing the border.

The bill forbids ICE from using any of its budget to investigate parents and sponsors of unaccompanied minors, even if they’re in the country illegally.

“You’re going to see the number of unaccompanied minors skyrocket because you basically have opened the gates and said, ‘OK, go ahead and smuggle your kids, because ICE can’t do anything about it,’” he said.

He predicts unaccompanied minors will become another group demanding amnesty and citizenship.

He wants the TVPRA to allow for the return of unaccompanied minors to their home countries. Now, only Canadians or Mexicans can be returned.

Morgan wants the Flores agreement to allow for family detention through the completion of their court proceedings, which would be around 50 to 60 days. Currently, children cannot be detained for more than 20 days, even with their parents.

And the credible fear threshold allows for almost everyone who claims “fear of return” to their home country to pass the initial screening, despite almost all of them subsequently not meeting the asylum requirements.

The House passed on Dec. 11 the Farm Workforce Modernization Act that would essentially give amnesty to up to 2 million illegal aliens in the country.

“For 2 million folks, it would mean that they would no longer face the threat of deportation,” said Rep. Joaquin Castro (D-Texas) on Dec. 11.

The bill is unlikely to pass the Senate because “it goes too far,” Vaughan said. But just talking about amnesties creates a surge to the border, she said. “The problem is that … every time Congress starts talking about amnesties, and even passing them in one chamber or the other, it motivates people to try to come here illegally.”

In the Senate, the restructuring of visas is under discussion with the Fairness for High-Skilled Immigrants Act. It seeks to remove the per-country cap for employment-based immigrants—predominantly Indian and Chinese tech workers.

It would also create a status comparable to a green card and would potentially apply to hundreds of thousands of people each year, including foreign students, exchange visitors, NAFTA workers, investors, and more, according to Vaughan.

Sanctuary jurisdictions that shield illegal aliens from immigration enforcement will remain in the spotlight in 2020.

“It’s already bad for ICE [and] it’s going to get worse,” Homan said.

In Los Angeles, ICE arrests of criminal aliens are already much lower than in New Orleans and Salt Lake City.

“Los Angeles used to be the highest producer of criminal aliens that were arrested. And the numbers are in the toilet in Los Angeles because ICE doesn’t have access to the jails,” Homan said.

“You can’t have it both ways. You can’t demand due process and tell us to ignore the final [deportation] decision of the [immigration] courts. No other legal system in the world works that way.”

Vaughan said that until ICE’s authority on detainers is clarified by the Supreme Court and until the supremacy of federal authorities is established more clearly—either by Congress or in the courts—sanctuary jurisdictions will be  able to thumb their nose at ICE.

Customs and Border Protection seized more than 800,000 pounds of drugs in fiscal 2019, mostly at ports of entry, according to Morgan.

“The four hard narcotics—heroin, meth, fentanyl, cocaine—all those hard narcotics went up last year,” he said. It’s impossible to determine how much slipped through undetected—either at ports of entry or in between, including tunnels.

Trump has toyed with designating the cartels as foreign terrorist organizations, but said he has held back at the request of Mexican President Andrés Manuel López Obrador.

Vaughan suggests that López Obrador is politically comfortable with Trump’s immigration policies, but “his unwillingness to take on the cartels is undercutting the progress on immigration.”

Homan said he thinks Trump will pressure Mexico into allowing the United States to take the lead on the cartels.

He’s concerned that leftist activists will “shop some judge” to declare that Mexico is no longer a safe third country for Central Americans to wait for their immigration hearings under the MPP program. If the program ends, it’ll trigger another rush for the border.

All of the Democratic frontrunners have vowed to decriminalize border crossings, provide health care for illegal immigrants, defund or abolish ICE, and provide amnesty to large swathes of illegal aliens already in the country.

“I think this border will be chaos if one of the Democrats win the election,” Homan said.

Vaughan said the nominee will likely claim to be tough on border security, but will essentially eradicate interior enforcement.

“The most important talking points for them will be amnesty,” she said. “Because they see the beneficiaries of an amnesty as future voters for them.”