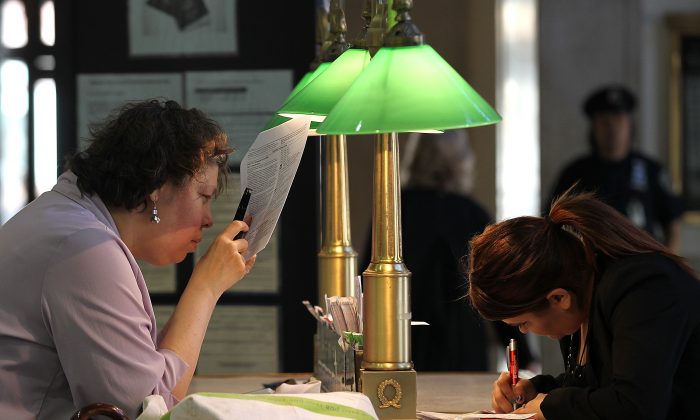 U.S. Postal Service customers go over tax documents at the James A. Farley Post Office in New York City on April 17, 2012. If you’re not in a high tax bracket, you can still make decisions to positively affect next year's tax return. (Justin Sullivan/Getty Images)
Business

December is the month for holiday gifts, year-end bonuses, and year-end tax reviews.

Yes, you read that right. Reviewing your tax situation and making year-end moves, if appropriate, could save a taxpayer thousands of dollars in April of the following year.

Below we will review several year-end tax considerations to keep in mind as 2014 comes to a close.

Contributing to a 401(k) or an individual retirement account (IRA) is a smart tax move. It reduces your taxable income in the current year, so it makes sense for those who are on the cusp of paying a higher tax rate.

But even if you’re not in a high tax bracket, contributing to a tax-deferred retirement account is good money management. It lets your pretax income grow, which is not taxed until you take the money out. The 2014 limit for contributing to 401(k) plans is $17,500.

This move only applies to those in the highest tax bracket. If you reside in the 39.6 percent taxable income bracket—that’s $406,750 for single taxpayers and $457,600 for married filing jointly—consider the effects of deferring part of your compensation.

If you’re on the cusp of being taxed at the highest rate, consider putting more money into a tax-deferred retirement savings plan or asking your employer to defer your bonus or other compensation to the following year.

For those who are self-employed, you may defer sending out invoices to customers until 2015.

Be Wary of Buying Mutual Funds in December
Certain mutual funds pay dividends and capital gains accumulated during the year in an end-of-the-year dividend payment.

While dividends are always welcome, this type of payment will cut into the price of the mutual fund, which usually decreases by the exact same amount as the dividend paid. In essence, this payment is a return of capital. And if you analyze your overall portfolio, the amount of investments (including cash) doesn’t change by this dividend payment.

Unfortunately, the IRS doesn’t get that. The IRS levies taxes on cash, so that dividend payment will be taxed at the capital gains rate, even if you have unrealized losses in your portfolio. Essentially, you’re worse off than before you got that dividend.

One can give monetary gifts to individuals tax free up to $14,000 per person. While this isn’t earth shattering in a vacuum, there are certain tax situations where it is advantageous.

For instance, for someone who is elderly, giving family members amounts up to the gift-tax threshold is a good way to avoid paying estate taxes. While the federal estate tax threshold is more than $5 million, numerous states impose inheritance or estate taxes on far smaller amounts.

Reviewing Your Tax Withholdings
In an ideal world, you shouldn’t get any tax refunds. While that may sound counterintuitive, getting a tax refund means that you lent the government your hard-earned money interest-free for up to 12 months.

If you’re on W-2, your employer should withhold an amount of tax that equals, as precisely as possible, the amount you owe on your tax return. To adjust your withholding, file an amended W-4 with your employer. The more “allowances” you claim, the lower the withholding. You can also write in the exact amount you wish to withhold.

The average American gets $3,000 back from the federal government a year. That translates to more than $250 in monthly income that consumers are giving up. If you feel that you’ll just waste the $250 if it’s in your pocket, you can stash the money away in a savings account or investment account and withdraw it after April 2015 as if you received a tax refund. You’ll likely end up with more than the $3,000 you would’ve received.