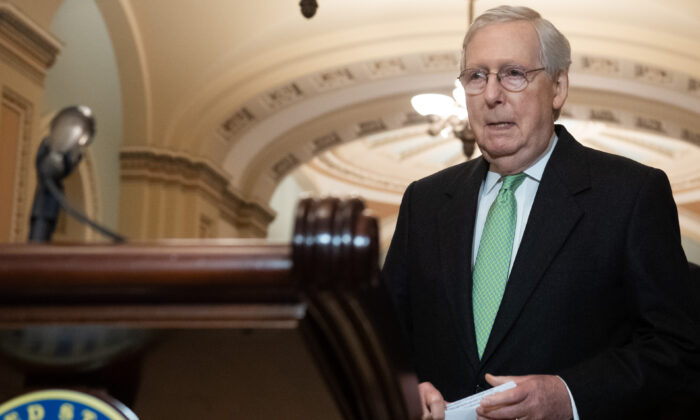 Senate Majority Leader Mitch McConnell at the Capitol in Washington on Dec. 17, 2019. (SAUL LOEB/AFP via Getty Images)
By Mark Tapscott

WASHINGTON—Buried in the $1.4 trillion bipartisan budget deal agreed on by congressional leaders and President Donald Trump is a huge taxpayer-funded bailout of the United Mine Workers of America (UMWA) union pension.

Critics say this is the first of many more costly rescues.

Costs of that measure were estimated to be nearly $640 billion if it became law, and it faced mixed prospects in the Senate after the Congressional Budget Office (CBO) released a study saying many of the affected pension plans would never repay their bailout loans.

“CBO projects that about one-quarter of the affected pension plans would become insolvent in the 30-year loan period and would not fully repay their loans,” the congressional agency told Sen. Mike Enzi (R-Wyo.) in a Sept. 7 letter.

Sen. Rob Portman (R-Ohio) is the only other Senate Republican co-sponsoring the new bill. Eleven Senate Democrats are co-sponsors.

“To help these Kentucky miners and their families, Senators Capito, Manchin, and I proudly joined to introduce the Bipartisan American Miners Act, and at my request, our legislation has been included in the government funding bill that will pass Congress and head to President Trump’s desk to become law,” McConnell said in a Dec. 16 statement.

The mineworkers pension bailout also includes a provision to cover certain unfunded health care costs promised by the union. Trump is expected to sign the overall spending deal into law on Dec. 20.

Cecil Roberts, UMWA’s president, was quoted in McConnell’s statement saying, “Majority Leader Mitch McConnell’s support was crucial to securing this legislation, and on behalf of America’s retired coal miners, I thank him for his efforts to ensure this became a reality. We will never forget it.”

The major factor in creating the current problems with underfunded multi-employer pension plans is that they were exempted years ago from the government’s requirement that single-employer private sector programs fully fund promised benefits in advance.

The exemption allowed the union plans to set aside funding for less than 100 percent of projected benefit costs. The UMWA funded only 33.3 percent of its promised benefits.

Other ailing union pension plans are in worse shape, with the United Food and Commercial Workers Union plan able to cover no more than 17.6 percent, and the New England Teamsters and Trucking Industry Pension with funds available to cover just 17.7 percent.

The problem with the McConnell bill, according to the Heritage Foundation’s Rachel Grezler, is that it

for bailing out the hundreds of other union and non-union multi-employer pension programs that are near bankruptcy due to years of underfunding.

“They included the bailout that just addresses the mine worker pension, so of course that’s a smaller price tag,” Grezler told The Epoch Times on Dec. 18, “but just as soon as you open the door to one bailout, can you really say no to the other 1,400 ailing plans that are out there?”

Grezler said McConnell had previously opposed a narrowly focused bailout because the problem needed to be addressed more comprehensively.

“But then, for I think political reasons, he reversed course and decided to introduce his own version of the House bill and bring it up, and now it’s part of the [spending] package and will almost certainly go through,” she said.

Grezler said there are about 100,000 coal miners who will be helped by the McConnell measure, but that’s only about 1 percent of the pensioners covered by the rest of troubled union and private sector multi-employer retirement plans.

“There are about 11 million people with these multi-employer pension plans, they are all massively underfunded, and this is, okay, $6 billion for this one pension plan. But the big picture is $638 billion of underfunding, and when you extend that to state and local government, you’re up to $6 trillion,” she said.

Bailing out all of the potentially covered private and public pension plans would cost every household in America an estimated $52,000, according to Grezler.

Most participants in public pension plans are exempted from coverage by the Social Security program.

Grezler believes the next union pension program for a bailout will be the Teamsters’ Central States, Southeast, and Southwest Pension Fund, which has a $44 billion unfunded liability.