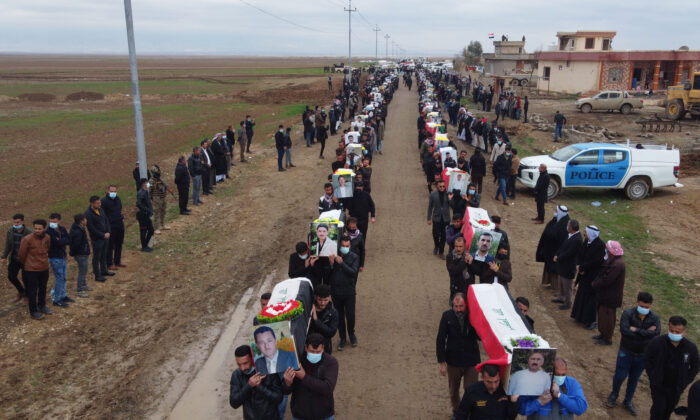 Mourners carry coffins wrapped in the Iraqi flag in a procession during a mass funeral for Yazidi victims of ISIS in the village of Kojo in the Sinjar district of Iraq, on Feb. 6, 2021. (Zaid Al-Obeidi/AFP via Getty Images)
Middle East

VATICAN CITY—Civil and religious leaders of the Yazidi people have issued an open letter to Pope Francis on the eve of his historic trip to Iraq, asking the leader of the Roman Catholic Church to “advocate for us loudly for our petitions” during the visit as well as seeking a meeting with the group’s spiritual leader.

Seven years have passed since harrowing reports began to trickle out of ISIS-controlled Iraq, detailing genocide by the terrorist group against an ethnic and religious minority people who have claimed thousands of years of history centered on their holy mountain, Iraq’s Mt. Sinjar.

Once a thriving agrarian community over a million strong, according to Yazidi leader Gahzi Morad Barakat, less than an estimated 700 families are all that remain within the shelter of their mountain.

“Many, like me, escaped on foot in the mountains. From there, we spent all we had to find refuge in Europe, America, Australia,” Barakat said. “Our people are in exile, and many will not return to our Sacred Mountain.”

In an exclusive interview with The Epoch Times, Barakat—who now lives as a refugee in Italy—recalled the horrors he experienced while defending his home and his people.

“After Daesh was defeated, many of those who had not escaped remained on the mountain hoping their loved ones would be found, their women and children purchased or rescued from slavery. So many countries and NGOs promised help, but very little help has come. Our people have been forgotten. We are a proud people, a self-reliant people, but Daesh took everything.”

Barakat explained how he and a small network of fellow Yazidis organized a recent endeavor with an Italian Catholic group, “The Disciples of Padre Pio,” to collect clothes for the more than 700 families languishing in dilapidated U.N. tents on Mt. Sinjar, after ISIS destroyed their homes.

“Our men and boys have been slaughtered. Our women and children are haunted by the atrocities they have experienced and seen. We now live in fear our neighbors will return with violence if we rebuild … and how can we rebuild? Daesh took everything from us, everything but our faith and our will that our ancient culture survives.”

Barakat said that investment is what his people long for, not simply financial aid or perishable goods.

“We are a proud people who wish to be self-reliant. We have worked hard to try and rebuild what we can, but work is scarce and money is temporary relief. Daesh destroyed our irrigation systems for our farms, and if we rebuild them, we fear they will be destroyed again in the next conflict from our neighbors.

“We wish to remain neutral, in peace as our faith teaches, but our mountain is considered ‘strategic.’ Our children have the right to grow up with pencils in their hands, not weapons of war.”

An Open Letter to Pope Francis

Upon hearing that Francis had chosen to visit Iraq next month, the Yazidi leaders quickly decided to issue an open letter, through Barakat, to the Holy See, the contents of which include a renewal of multiple appeals—from 2015, and again in 2018—to the Pope to speak on behalf of their people.

“We ask that you call upon International Leaders to recognize our people under the UN Declaration on the Rights of Indigenous People, and as Internally Displaced,” they wrote.

Amid reports that ISIS may be using the pandemic to regroup in the region, and of renewed tensions and outbreaks of conflicts in Turkey, Barakat—along with other Yazidi leaders—believes the pontiff’s visit is essential to spotlight the sufferings of vulnerable minorities, including Christians and Yazidis.

Included with the letter was a personal invitation by Hazim Tahseen Bag, president of the Supreme Yazidi Spiritual Council, to Pope Francis to visit what remains of their community on Mt. Sinjar, along with the holiest place in their Zoroastrian heritage, Lalish Temple.

By request from the Yazidi community, The Epoch Times provided the open letter and invitation to multiple individuals within the Holy See, including the Pontifical Council for Interreligious Dialogue—which, in 2019, produced the so-called Abu Dhabi declaration on “Human Fraternity and Living Together.” The Pontifical Council acknowledged receipt of the letter but issued no comment.

It’s unlikely that Francis will deviate from his publicized schedule, even after a historic invitation from a religious minority that boasts of its peaceful coexistence with and support of Christians—to include protection of Christian minorities such as the Armenians during the 1915–1919 Armenian Genocide.

The Holy See press office didn’t immediately respond to requests by The Epoch Times for comment.

I am Ghazi Morad Barakat, representative of the Yazidi community in Italy.

Your Holiness, we have heard that you have honored Iraq in your first Apostolic visit since the coronavirus spread throughout the world, and are grateful that your visit will bring critical focus on the difficulties so many of us are suffering, still.

Unfortunately, despite the promises of aid and protection from the International community, over 700 Yazidis remain on Mt. Sinjar, living in dilapidated tents given to us by the UN over 7 years ago. None of the aid from Aid to the Church in Need, or the thousands of NGOs and Charities have reached our people, and we must beg your help to bring light to this travesty. Our ancient people, our culture, and faith may soon disappear. We now are turning to recording our stories, so that the future may remember we once existed.

The Yazidis are a peaceful people, and as Zoroastrians, seek to live in harmony with all—but history shows how little regard is given to our way of life and culture by our neighbors. From the time we protected Armenian Christians escaping Turkey in the early 20th century to when Daesh invaded Iraq, our cities have been looted and burned and our people massacred below our sacred mountain. Our men and boys have been slaughtered. Our women and children are haunted by the atrocities they have experienced and seen. We now live in fear our neighbors will return with violence if we rebuild … and how can we rebuild? Daesh took everything from us, everything but our faith and our will that our ancient culture survives. That will is eroding with time, as our people languish forgotten by the world.

Our Christian brothers have given to us what little they, themselves, can spare. They provide for us out of their own need, as they also lost so much and suffered so much under the barbaric Daesh. We bless them and are eternally grateful, but such aid is, by nature, temporary. We are a proud people, we do not wish to rely on others. We seek to work, to live off the fruits of our labor. Our children should grow up with pencils in their hands, not Kalashnikovs.

Pope Francis, in 2018, you met with our leaders, and we were grateful for your support. You brought the world’s focus back to our plight. Now, as you visit the land of our heritage, we ask that you remember, once more, the poor, the forgotten, the Yazidis.

We ask that you call upon International Leaders to recognize our people under the UN Declaration on the Rights of Indigenous People, and as Internally Displaced. Our mountain should be considered protected by the International Community, and our people under conservation as we see our culture and faith displaced by violence throughout the world. We should not have to fear future invasions by Iraqis, Turkish, Iran. We should be considered neutral and our mountain as neutral and sovereign territory.

We ask you, Pope Francis, to speak openly about us as you will of your own people—advocate for us loudly for our petitions as you visit Iraq.

Finally, we ask you to have a meeting with our spiritual leader, Ali Alyas, Baba Sheikh of Lalish, when you will visit Erbil.

Letter of appeal to Pope Francis from Iraqi Yazidis