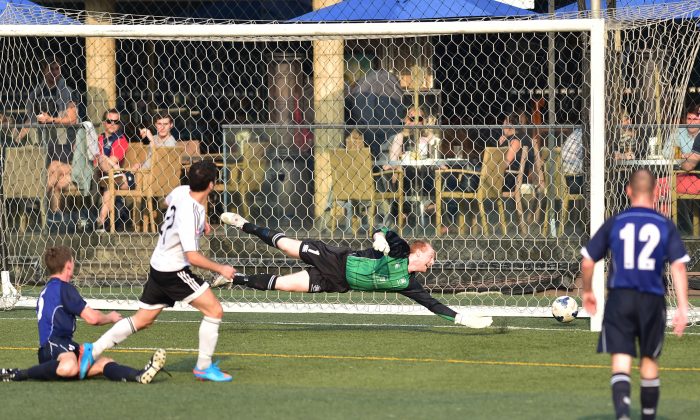 GAS No 22 scores their second goal just before half time past Wanderers goalkeeper Freddie Toomer during their 3-all top of the table clash in the Yau Yee League First division match at Sports Road on Sunday Nov 29, 2015. (Bill Cox/Epoch Times)
HK Football

In Saturday’s other game, South China were 2- nil victors over BC Rangers courtesy of a 39th minute strike by Manoel Santos from Chan Siu Ki’s cross, and an 83rd minute header from Awal Mahama from a Liang Zicheng cross.

In the first division, Sun Hei were 1-nil victors over Kwai Tsing, Shatin were 3-nil winners against Kwun Tong, Citizen won 5-3 against Wanchai, Tai Po were 3-nil victors over Tuen Mun, HKFC won 3-1 against Wing Yee, and Lucky Mile were beaten 5-nil by Yau Tsim Mong.
Tai Po lead the table with 25 points from 11 games, with Citizen second with 24 points, HKFC and Sun Hei joint third with 23 points from the same games, and Yau Tsim Mong fifth on 21 points from 10 games.

Eastern District lead the table on 24 points, with Sham Shui Po second on 23 points, and Sparta Rotterdam Mutual third with 22 points, all from 10 games played.

Central and Western lead the table with 34 points, with Hoi King second with 33 points.[/color]

Yau Yee League
In the first division, Albion returned to winning ways with a 2-1 win against HKU70’s , Wanderers drew 3-all with GAS in the top of the table clash, GAS taking a 2-nil first half lead before Wanderers fought back to lead in the second half, and Aaron Martindale equalising for GAS 2 minutes from time, KCC Dragons drew 2-all with Baker Tilly Spartans, Swiss XI won 9-1 against Colts, and The Store House Squadron were 2-1 winners against HKDC Mobsters.
GAS lead the table with 25 points from 10 games, with Wanderers second with 23 points, Albion are third with 21 points, and KCC dragons fourth on 20 points, all from the same games at the half way point of the league competition.

In the second division, French Kiss were 4-nil victors over IUSC (Tai Po), The Store House Hearts were beaten 4-nil by WYFC06, GGFC drew 2-all with IES, Colloids FC were 4-1 winners against Antonhill, in the top of the table clash KCC Knights were beaten 2-nil by Azzurri, and Universtiy drew 3-all with Boda Seniors.

French Kiss lead the table with 24 points, with Azzurri second with 23 points, and KCC Knights third on 22 points, all from 11 games.

In the fourth division, Scorpions drew 2-all with Standard Chartered, Rising Sun were 4- winners against Wah Yan, Maccabi HK drew 1-all with Darts, Friends of Barclays were 8-1 victors over Bapcaoll, Skyline won 3-2 against |Hung Art, and Outward Bound were beaten 5-nil by Power 22.

Friends of Barclays lead the table with 31 points from 11 games, with Maccabi HK second with 28 points from the same matches.