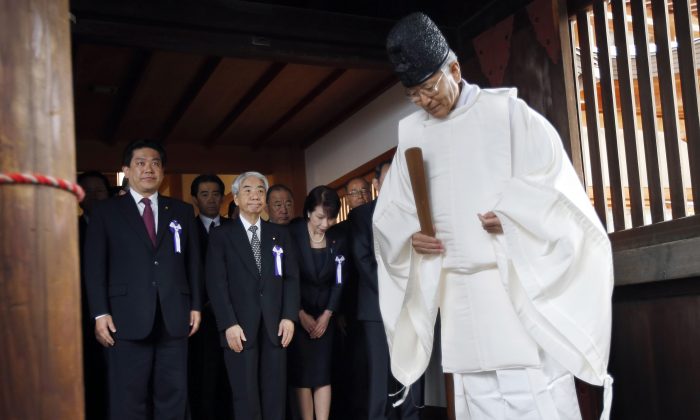 A group of Japanese lawmakers are led by a Shinto priest at the Yasukuni Shrine in Tokyo during an annual autumn festival in Tokyo, Friday, Oct. 18, 2013. (AP Photo/Koji Sasahara)
Asia & Pacific

Amid the continuing Yasukuni Shrine controversy, Japanese Prime Minister Shinzo Abe is planning to visit the shrine by the end of the year.

Koichi Hagiuda, one of Abe’s aides, told Japanese reporters that Abe will visit by December this year, reported the Japan Daily Press.

Hagiuda said that a prime minister should pay tribute at the shrine at least once a year.

The shrine was founded in 1869 on orders of Emperor Meiji, and is dedicated to the souls of the Japanese people who have died in the name of their country since that time, according to BBC. That includes soldiers, war-time nurses, and people who committed suicide at the end of World War II.

But the controversy stems from the shrine venerating “14 convicted class A war criminals, including Prime Minister General Hideki Tojo.”

The visits by prime ministers anger China and Korea, who fought with Japan in the first half of the 20th century.

Last week, Internal Affairs and Communications Minister Yoshitaka Shindo and around 160 members of parliament visited the shrine, to pay their respects to the dead.