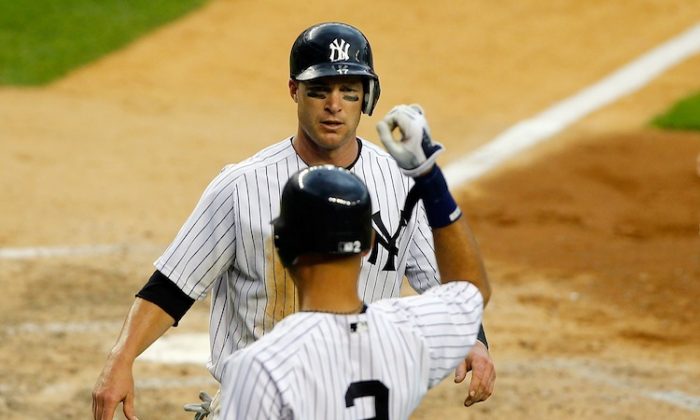 Hiroki Kuroda (9-7) shut down the Toronto lineup for seven innings Wednesday afternoon as the rain-delayed contest was finally called in the middle of the seventh inning, after a second rain delay, with the Yankees (57-34) in front of the Blue Jays (45-47) 6–0.

The scoreless performance by Kuroda is his third career complete game in four and a half seasons in the big leagues. In addition, with the afternoon shutout, the 37-year-old right-hander has now won all four of his daytime starts while allowing no earned runs in 30 combined innings this season.

For Joe Girardi’s squad the win completes the three-game sweep of Toronto, one in which the Yankees outscored the Blue Jays 18–4, moving the team a season-high 23 games over .500.

And just as the team is on fire (an incredible 36-13 mark since May 21) so is Robinson Cano, who extended his hitting streak to a career-high 21 games with a double in the bottom of the first. Cano, who’s hitting .402 over that stretch, scored when the next batter when Andruw Jones singled him home as part of a four-run opening inning for New York that gave Kuroda a nice cushion to work with.

Included in those four runs was a two-run home run by Mark Teixeira, his 19th of the season which was one of two hits on the day by the two-time All-Star. As a team, the Yankees now have 146 home runs on the season—tops in the majors.

After surrendering four runs in the first, Romero gave up a Dewayne Wise ground-rule double in the fourth that scored Jayson Nix to make it 5–0. Then again in the sixth, Wise singled home Nix again to make it 6–0 as the Yankees, who’ve struggled hitting all year with runners in scoring position were four-for-six Wednesday in that department.

If there was any bit of good news for Toronto Wednesday it was that promising rookie third baseman Brett Lawrie escaped major injury after falling into the camera well going after a foul ball. The 22-year-old fell six feet onto a concrete floor during the attempt and had his right leg hit a pole on the way down. X-rays came back negative and Lawrie is currently diagnosed with a right calf contusion.

“It’s sore right now, just a little stiff, it just felt like someone took a bat and crushed me in the back of the leg,” Lawrie said, on the team’s website. “It’s like a stiff Charley Horse right now, it will be all right.”

Up next for the first-place Yankees is a four-game series in Oakland (47-44) starting Thursday night. Freddy Garcia (4-2) will oppose rookie A.J. Griffin (1-0) in the opener.