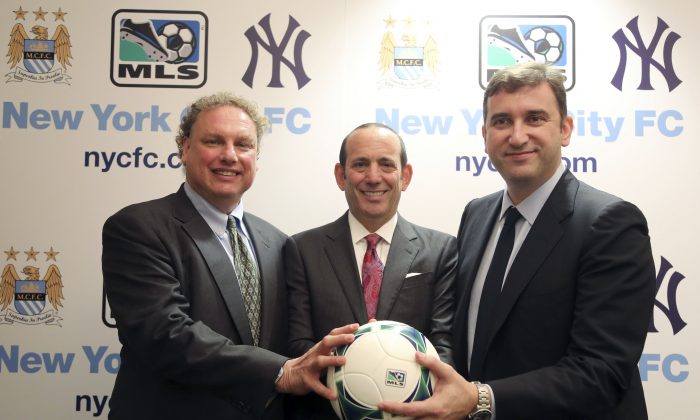 Yankees Move Turns up the Heat on Soccer Stadium Search

NEW YORK—The New York Yankees are getting into the soccer business, and in the process turning up the heat on finding a location for a new stadium in the city.

The Yankees are partnering with Manchester City to own Major League Soccer’s 20th team, which will be called New York City Football Club. The new team will begin play in the 2015 season.

“We proudly welcome two of the most prestigious professional global sports organizations to Major League Soccer,” said MLS Commissioner Don Garber in a statement. “This is a transformational development that will elevate the league to new heights in this country.”

Manchester City, owned by Sheik Mansour bin Zayed bin Sultan Al Nahyan, will be the majority owner of the team.

The new team is intended to spark a rivalry with the New York Red Bulls, who play in Harrison, N.J.

“The Red Bulls now will have a rival here in the market providing them with that derby-like competition that is such a driver of what makes football so successful around the world,” said Garber, calling the addition of a second New York team a “big transformational event.”

The team begins its history without a home pitch. NYC FC will start play at an interim home—which has yet to be determined—and will consider other sites for a stadium.

“New York City FC will have a permanent home in the City in the great traditions of New York sports and world soccer—a home that must be a sports, commercial and civic success,” said Ferran Soriano, CEO of Manchester City Football Club in a statement.

MLS has been negotiating with New York City to build a stadium in Flushing Meadows Corona Park, near the home of the New York Mets. The move has been met with stiff resistance from residents who do not want to lose their park land.

“As everyone in Queens – except for most of our elected officials – seems to know, the proposed site was a terrible location for any sort of stadium, as it would have horribly impacted the park as well as sat directly on top of the Flushing River, which the Fountain of the Planets currently is sited,” said Paul Graziano of Save Flushing Meadows-Corona Park, in a statement.

Soriano promised to listen to residents before making any decision.

Mayor Michael Bloomberg was also supportive of the new team coming to town, and sees Flushing Meadows as a good option.

“I have always thought the stadium in Flushing Meadows Park is the right place to put it,” the mayor said Tuesday May 21. “It is in the end of a park that does not get much use and we could get a lot of aid for fixing up the part of the park we do use.”

Bloomberg suggested turning the unused Flushing Airport land into park land, a move that has angered residents of the area.

When pressed about other places to put the stadium, Mayor Bloomberg told a reporter the site made sense in part because of the diversity of Queens.

Graziano said there were plenty of other privately owned locations in the five boroughs including the Sunnyside Rail Yard that would provide plenty of space for a stadium without taking away from local park space.