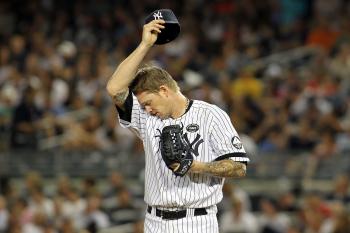 Toronto’s six doubles in the fifth inning tied an American League record held by the Washington Senators (1934) and the Texas Rangers (2002). Oddly enough, the Rangers record also came against the Yankees.

Yankees starter A.J. Burnett got the pitching off to a good start on Monday coming off a solid performance against the Cleveland Indians last week.

Burnett quickly closed out the top of the first with three outs against three Blue Jays batters, and had clean third and fourth innings after giving up a solo homer to Vernon Wells in the second inning.

But the 33-year-old ran into trouble in top of the fifth against a string of Blue Jays sluggers that would prove to cost New York the game.

Jays left fielder Travis Snider got the fifth inning started with a lead-off double to center field, and third baseman Edwin Encarnacion followed with a deep homer to left field to bring the Jays up 3–2.

Burnett then walked catcher Jose Molina, and gave up a double to Fred Lewis to put runners on second and third with no outs.

Sloppy base running by Molina gave the Yanks their first out in the inning, but then Jose Bautista, Vernon Wells, and Aaron Hill hit consecutive doubles to put the Jays up 7–2 with two outs.

That was enough for Joe Girardi to send Burnett packing after 95 pitches. Relief pitcher Sergio Mitre took his place.

Mitre didn’t have any better luck though, giving up a double to his first batter, Travis Snider.

It was Snider’s second double of the inning and gave Toronto one more run before Yankees left fielder Brett Gardner got the last out off a sprinting catch.

Monday’s game looked like it was going to fall in New York’s favor after Derek Jeter and Nick Swisher got the Yanks a quick two-run lead.

Jeter opened with a ground ball to right field for a single and Nick Swisher followed by blasting a homer to center field to bring the Yankees up 2–0 in the bottom of the first.

But the pinstripes went dry after the first inning until Mark Teixeira brought some relief in the bottom of the fifth inning.

The first baseman hit a two-run homer to right field after Jeter got on base with a sharp ground ball to bring the score to 8–4. Alex Rodriguez was next at bat with two outs, but struck out swinging—a common theme for him on Monday as he continues to struggle to hit his 600th home run.

The Yankees brought the score to 8–5 in the sixth inning off a Lance Berkman line drive single that sent Robinson Cano home from second with one out. It was Berkman’s first RBI in a Yankees uniform.

The Yankees had some other good opportunities to score in the sixth after Scott Downs replaced Jays starting pitcher Brandon Morrow.

Downs got off to a shaky start giving up a single to Marcus Thames that deflected off his foot and sent Berkman to third with only one out.

Gardner then reached first base on a fielder’s choice, with Berkman tagged out running home. But Jeter grounded out to end the sixth inning.

Two more scoreless innings passed until the bottom of the ninth when Swisher ended the game the way he started it: with a deep homer, this time to right field.

That brought the Yankees to within two 8–6 and gave them a chance to take the game back with sluggers Teixeira and A-Rod next up at bat.

But Teixeira struck out swinging and A-Rod grounded out to give the Blue Jays the win.

Swisher and Teixeira are now tied for the most Yankee home runs this year with 22, while A-Rod has 16. Jose Bautista of the Jays leads the Majors with 32 home runs.