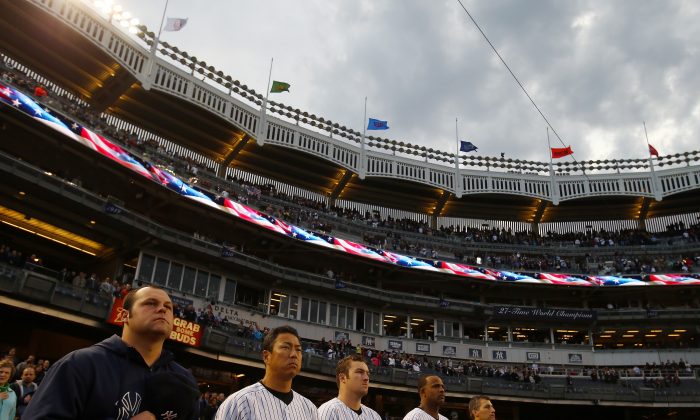 Joba Chamberlain and the rest of the New York Yankees observes a moment of silence to honor the victims of the Boston Marathon bombing on April 16, 2013 at Yankee Stadium in the Bronx borough of New York City. (Elsa/Getty Images)
Baseball

Yankees honor Boston: The New York Yankees offered a moment of solidarity with the victims of the Boston Marathon bombings on Monday.

The Yankees played Neil Diamond’s “Sweet Caroline,” the theme song for the Boston Red Sox, over the loudspeaker after the third inning against the Arizona Diamondbacks to show support for victims of the blast.

“Our thoughts and prayers go out to the victims and the families who were affected by the bombings and our respect and admiration go out to the police, medical personnel and first responders who acted so heroically,” said the Yankees statement on the team’s website. “We stand united with the participants, volunteers, staff and spectators of the Boston Marathon and the people of Boston.”

Yankees infielder Kevin Youkilis said that he and his family were “sick to our stomachs” following the bombing on Monday that killed three and left scores injured.

“It’s just a tragic day,” Youkilis added. “You have thousands of people down there just really enjoying amazing feats. I’ve been down there on the finish line, and it’s an amazing thing to watch these people finish a marathon. Then something tragic like that happens; you can’t put it in to words.”

Youkilis spent the majority of his career with the Boston Red Sox and he is married to the sister of New England Patriots quarterback Tom Brady.

Brady’s father, Tom Sr., also has an office near where the bombs exploded, according to ESPN.

The rival teams have buried the hatchet — at least for now. Yankee fans belted the Neil Diamond hit during a game Tuesday against the Arizona Diamondbacks, showing solidarity with their neighbor to the north a day after explosions at the Boston Marathon killed three people and injured more than 170.

“Everybody in New York knows what they’re going through,” said Mike Petti, a 48-year-old nicknamed Yankee Mike who for 13 seasons has been a staple of the bleacher section where the most hardcore fans — those who hate Red Sox Nation the most — dwell. “When it happened here, Boston was singing ‘New York, New York.'”

The teams’ rivalry, which has reared its ugly head in bench-clearing brawls and fan assaults over the years, is just one difference between the cities, both among the oldest in the country and each with a rich history.

But look around New York this week, and you’ll see nothing but love for Boston.

In what city officials said was a first, the bright-blue Boston city flag flew at half-staff at City Hall, on the orders of Mayor Michael Bloomberg, who grew up in the Boston suburb of Medford.

“We stand shoulder to shoulder with our friends in Boston, as all Americans do,” said Bloomberg, who in 2006 founded the group Mayors Against Illegal Guns with Boston Mayor Thomas Menino. Bloomberg said he phoned his counterpart Monday to offer him any help New York could provide.