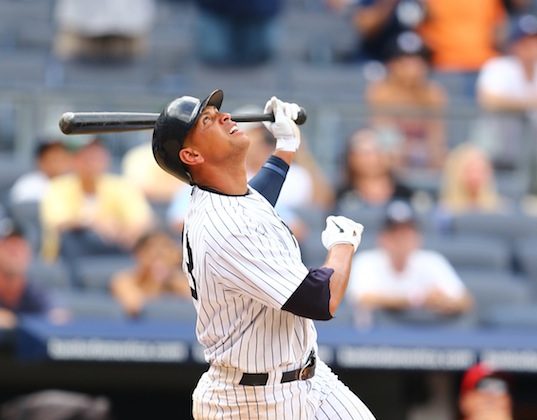 Alex Rodriguez, who homered in the first inning, popped out with the bases loaded to end the game. (Al Bello/Getty Images)
Baseball

Four home runs and a three-run-ninth inning rally wasn’t quite enough for the Yankees (54-34) to win and complete the three-game sweep of the Angels (49-40) Sunday afternoon as the Bombers were instead out-bombed by Anaheim, losing 10–8.

“It is kind of strange when you give up four home runs and not win a game,” admitted Yankees manager Joe Girardi afterwards, according to the Yankees website. “It’s not weird [losing] when you give up ten runs.”

The Angels matched the Yankees power with four shots of their own and held a seemingly-comfortable 10–5 lead heading into the bottom of the ninth before having to sweat out the win.

After a leadoff walk to Robinson Cano to start the inning, Mark Teixera deposited the Ernesto Frieri offering over the right field fence to cut the lead to 10–7.

After walking the next batter, Nick Swisher, Angels skipper Mike Scioscia promptly removed Frieri in favor of Scott Downs. Incidentally, the runs allowed by Frieri Sunday were the first the right-hander had allowed in 26-and-a- third innings with the Angels this season.

Downs then promptly gave up an infield single to Raul Ibanez before striking out Andruw Jones for the first out of the inning. After Russell Martin grounded into a fielder’s choice, Derek Jeter walked to load up the bases for Curtis Granderson. After awakening the crowd with a hard drive down the line that went just foul, Granderson eventually walked to score Swisher, closing the deficit to 10–8, and bringing up Alex Rodriguez with the bases still loaded and the winning run at second.

Downs, a left-hander was then relieved for the righty Kevin Jepsen to face the right-handed Rodriguez, who earlier had hit a two-run homer. Jepsen finally closed the door though, inducing a harmless popout to first base to retire A-Rod and end the game.

“It’s unfortunate we were one hit away from tying the game up,” said Girardi, who added that he loved the team’s ninth-inning comeback effort.

The comeback was necessary after starter Ivan Nova (10-4) struggled through six innings, giving up six runs on nine hits of which three were home runs.

On the opposite side, the Yankees were able to touch up starter Jered Weaver (11-1) for five runs off 10 hits, including three home runs in seven innings. The runs were the most Weaver had given up since allowing eight runs to Texas on May 13. Yet Weaver, who is second in the AL with a 2.26 ERA, got the win.

Next up for the Yankees is a three-game set with Toronto, at Yankee Stadium, starting on Monday with Phil Hughes (9-7) to face off against Henderson Alvarez (5-7).