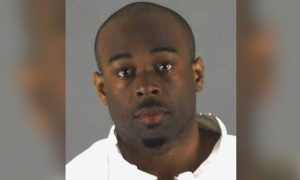 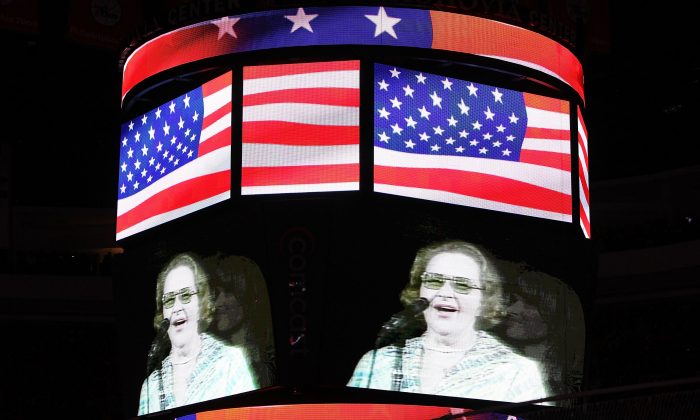 Singer Kate Smith is seen on the screen before Game Six of the 2010 NHL Stanley Cup Final between the Chicago Blackhawks and the Philadelphia Flyers at the Wachovia Center in Philadelphia, Pennsylvania, on June 9, 2010. (Andre Ringuette/Getty Images)
US News

A Jersey shore city will continue to play Kate Smith’s 1939 recording of “God Bless America” each morning, even as some sports teams reportedly stopped playing her rendition of the song.

Wildwood, New Jersey, located right along the coast and known for its sandy beaches, will continue playing the controversial recording of “God Bless America” every morning, the city’s mayor Ernie Troiano Jr. said in an interview with Dom Giordano on 1210 WPHT on Monday.

“My conversation with the mayor of North Wildwood, Patrick Rosenello, is we have no intentions of removing it,” Troiano Jr. said. “And it’s not a statement that we don’t understand what’s going on or we’re ignorant to the history, but the world has gotten so politically correct, and so afraid that they’re going to offend somebody.

“Well, you know what? The song is greater than anything, so it’ll continue to play in Wildwood.“

Both the Philadelphia Flyers and the New York Yankees stopped playing Smith’s version of “God Bless America” over reports of racist recordings from before World War Two.

The Yankees were the first to drop Smith’s rendition. For 18 years, the Yankee Stadium had used Smith’s recording of “God Bless America” in the middle of the seventh inning, New York Daily News reported, until they began investigating claims of Smith’s potential history of racism.

“The Yankees have been made aware of a recording that had been previously unknown to us and decided to immediately and carefully review this new information,” a club spokesman told Daily News. “The Yankees take social, racial, and cultural insensitivities very seriously. And while no final conclusions have been made, we are erring on the side of sensitivity.”

Smith’s rendition of “God Bless America” had also been regularly played before Flyers’ games instead of “The Star Spangled Banner,” and Smith herself performed the song several times before Flyers’ games in the 1970s, including the 1974 NHL finals winning game, where the Flyers beat the Boston Bruins to win the Stanley Cup.

The Flyers posted a statement saying Smith’s rendition of “God Bless America” would no longer be feature in their games.

“The NHL principle ‘Hockey is for Everyone’ is at the heart of everything the Flyers stand for,” Flyers President Paul Homgren said in a statement. “As a result, we cannot stand idle while material from another era gets in the way of who we are today.”

Smith, 1909–1986, was an American singer and popular radio performer during the 1930s and 40s. The two songs that she recorded in the 30s that are at the heart of the controversy are, “Pickaninny Heaven” and “That’s Why Darkies Were Born.”

The former song was performed in the 1933 film “Hello Everybody.” It was dedicated to “colored children” in orphanages, and had lyrics about “pickaninnies” and “great big watermelons.” According to the Jim Crow Museum at Ferris State University, pickaninny was “the dominant racial caricature of black children,” described as having “bulging eyes, unkempt hair, red lips, and wide mouths into which they stuffed huge slices of watermelon.”

Smith died at the age of 79, four years after she received the Presidential Medal of Freedom, America’s highest civilian honor.

While Wildwood and North Wildwood have chosen to keep playing Smith’s “God Bless America,” other Jersey shore cities have chosen not to.

According to NJ Advance Media, Sunset Beach in Cape May Point will play a new version of the song this summer.