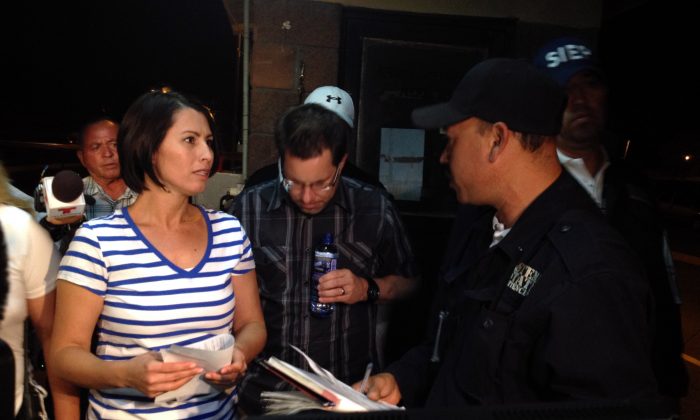 Yanira Maldonado, 42, left, accompanied by her husband, Gary, center, speaks to an official after being released from a prison on the outskirts of Nogales, Mexico late Thursday, May 30, 2013.(AP Photo/Cristina Silva)
US

Yanira Maldonado, an Arizona mother who was jailed in Mexico for allegedly smuggling marijuana, was released and returned to the United States.

Maldonado, 42, exited a jail on Thursday night and thanked Mexican officials. “Thank you for everything and the quality of person you are,” she said, according to ABC News.

She was freed after video footage showed that she got on a bus with no packages that could contain 12 pounds of marijuana. Police had originally claimed she had done so.

Maldonado was originally detained after soldiers found 12 pounds of marijuana under the seat of a bus she boarded that was heading back to the U.S. Maldonado went to Mexico originally to attend a funeral.

Officials reviewed security footage showing that Maldonado and her husband only brought bottles of water, her purse, and blanks on the bus.

“I love Mexico. My family is still there,” she told NBC. “Mexico is a beautiful country. Please don’t take it wrong.”

Lawyer Jose Francisco Benitez Paz said that the effort to smuggle 12 pounds of marijuana across the border was fairly sophisticated and required metal hooks, adding it would have been impossible for a passenger to carry it out, reported CBS News.

Her husband, Gary Maldonado, told USA Today that Mexican authorities originally demanded $5,000 for her release but the bribe ultimately fell through.

“I was in shock. I’m like this is not real. This is not happening. I don’t know. I thought maybe this was a set-up or a joke or something. I was just waiting for it to end but I realized that it’s real, that I’m being detained,” Maldonado told ABC News in a jail interview earlier this week.

Her family said Yanira Maldonado is a naturalized U.S. citizen who was originally born in Mexico.