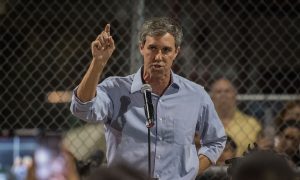 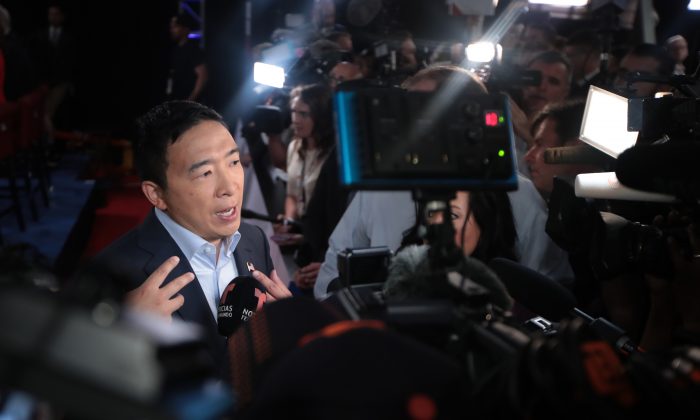 Yang Qualifies for Next Democratic Debate, Gabbard and de Blasio Among Those Who Haven’t Qualified

Businessman Andrew Yang qualified for the next Democratic presidential debate after getting 2 percent support in a poll released on Aug. 8.

The Monmouth University poll surveyed likely Iowa primary voters and gave Yang the fourth poll he needed to qualify for the September debate.

Yang’s campaign said he already met the number of unique donors, 130,000, that the Democratic National Committee stipulated for candidates to be allowed on stage.

“I said in the last debate that American politics had turned into a reality show that produced a reality-show president,” Yang said in a statement.

“Solutions don’t come in 30-second sound bites and the American people are tired of leadership condensed into 280 characters. The country heard my message and is ready to talk about real solutions to gun violence, the new realities of the American economy, and how we measure our health and success as a nation.”

We did it – poll #4! Thank you #YangGang – it is on to Houston and the Fall debates!! Special thank you to all who have been spreading the word. Let’s make history together! 👍😀🥊🇺🇸 https://t.co/WyYbnqWRil

On Twitter, Yang told his followers: “We did it – poll #4! Thank you #YangGang – it is on to Houston and the Fall debates!! Special thank you to all who have been spreading the word. Let’s make history together!” He said that he was on his way to the Iowa State Fair, a regular stop for presidential candidates.

Yang, a tech entrepreneur, has never held an elected office and is the only Asian-American in the Democratic field of contenders. His signature campaign promise is universal basic income, a program that would give every American $1,000 a month.

A number of better-known candidates, including a slew of officeholders, have thus far failed to meet at least one of the benchmarks for the next round of debates.

The DNC announced that candidates will need to receive 2 percent or more support in at least four national polls or polls in Iowa, New Hampshire, South Carolina, and/or Nevada.

The polls must be released between June 28 and Aug. 28 and conducted by only certain pollsters. The polls cannot overlap in terms of being in the same state or region or by the same pollster.

The criteria were increased from those necessary for appearances in the CNN debates in July. Those thresholds required 1 percent or more in four different polls or receiving campaign contributions from 65,000 unique donors, including 200 donors each from 20 different states.

Gabbard, Washington Gov. Jay Inslee, and Castro said they’ve hit the donor benchmark but lack the polling as of yet.