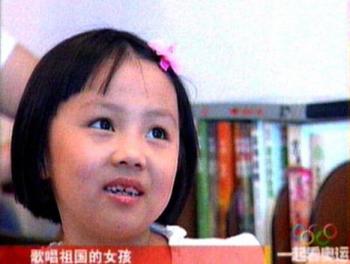 This image received on August 12, 2008, taken from television on August 11 shows seven-year-old Yang Peiyi during an interview in Beijing. (AFP/AFP/Getty Image)
Opinion

Yang Peiyi, You’re Not Ugly; They Are

Masha Ma
biggersmaller
Print
It’s a story we all know by now. Yang Peiyi was preparing for what was supposed to be the performance of her little life. Fifteen minutes before she was to sing “Ode to the Nation,” and as four billion tuned in to watch the opening ceremonies of the Beijing Olympic Games, Yang Peiyi was told she’d been replaced.

But as her nine-year-old replacement took to the stage and began to sing, what Yang heard was her own voice piping over the loudspeakers. The replacement was lip-syncing. Yet it was the replacement, Lin Miaoke, who became an instant star in China.

Days later the show’s musical director Chen Qigang confessed to the lip-syncing but asserted it was “a choice we had to make.”

"The reason for this is that we must put our country's interest first,” Chen said. In short, Yang’s appearance on stage would have tarnished the nation’s image. Sure, Yang has some crooked teeth. But she’s seven years old.

While you might expect Yang to have been devastated by the incident, she was gracious in an interview with Chinese state-run media. She said she was happy just to have had her voice used in the show.

China-born and China-bred, I can relate to Yang. When I was nine, my school formed ties with a school in Canada. Some students were chosen to be pen pals with Canadian students. I asked to be a pen pal but was told my image was not good enough to represent the school.

That was heartbreaking for a nine-year-old. For a week I would cry at home after school every day. My mom tried to console me by telling me a girl’s brain was more important than her face (which I don’t believe is true, at least not in China). Despite my mom’s efforts, my self-esteem had been shattered.

Yet I was surprisingly chosen to be a pen pal when one of the school’s vice-principals overruled the decision that I was not attractive enough. I recall the vice-principal and a teacher debating the merits of my appearance in front of me, as though one were trying to sell the other a horse. Though finally chosen, I was haunted by the thought that I was the ugliest of the students allowed to take part.

Later I received several letters from my Canadian pen pal, a girl named Candice. Each letter had already been opened and reviewed by the school, something none of us found odd. The school was the authority, after all.

I still remember what Candice wrote in her first letter. She told me that she had a brother and was raising gold fish at home. I responded as I was told to: “Let’s contribute to the friendship between China and Canada.”

Looking back on my experience, I ask myself: had I been rejected as Yang Peiyi, what would I tell the media? I know I would sound pretty composed, too: “I am not sad because I believe the national interest is higher than anything.” In fact, many kids in China can easily learn how to talk this way from the media, their teachers, and even their parents.

But what is the national interest? In the eyes of the Communist regime, an individual, be it an adult or a child, is nothing but a cog in a giant state machine, which can be replaced or discarded without thought, and whose job it is to help paint an image of perfection for the outside world. The regime has always been trying to make people believe this theory.

Yang Peiyi, you’re not ugly. The regime that refuses to respect its people is the ugly one.

Masha Ma is a graduate of Peking University in Beijing and holds an M.A. degree from the Munk Centre for International Studies at the University of Toronto. She is now completing a degree for juris doctor at University of Toronto’s Faculty of Law and writes a weekly column on culture for the Chinese edition of The Epoch Times.