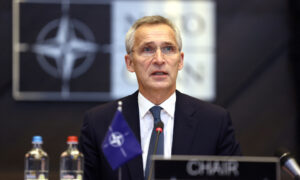 Another, smaller crater has been found in Siberia’s Yamal Peninsula, located about 20 miles from the massive hole that was discovered last week.

According to the Moscow Times, reindeer herders discovered the second hole. The Times notes that both craters likely formed in the past couple of years, and both have icy water at the bottom.

Local lawmaker Mikhail Lapsui told told the Times the second crater is “exactly” like the first one, albeit “much smaller.” He added, “Inside the crater itself, snow can be seen.”

Last week, scientists who examined the first hole said it might have been caused when water, salt, and gas exploded underground, reported the Siberian Times.

The first hole is estimated to be about 50 meters wide and 70 meters deep, with water fras causing an effect like the popping of a Champagne cork,” said the report, which cited a researcher with the Subarctic Scientific Research Center.

On Wednesday, Slate’s meteorologist Eric Holthaus theorized that both holes have a “clear connection with climate change.”

“Around the time the first crater is estimated to have formed—2012 or 2013—temperatures were unusually high for that part of Siberia. In general, the whole Arctic region is the fastest warming place on the planet, warming about twice as fast as global averages. A study published last year said the Arctic hasn’t been this warm in at least 120,000 years,” he wrote.

Over the past couple of days, scientists were able to probe the crater.

“There is nothing mysterious here,” Andrey Plekhanov, a researcher, told the Siberian Times. “It is simply Mother Nature’s law with its internal pressure and changes in temperatures.”

Plekhanov added: “For now we can say for sure that under the influence of internal processes there was an ejection in the permafrost.”

But he stressed that it’s quite odd nonetheless.

“I’ve never seen anything like this, even though I have been to Yamal many times,” he said.