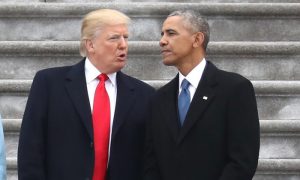 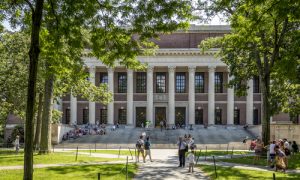 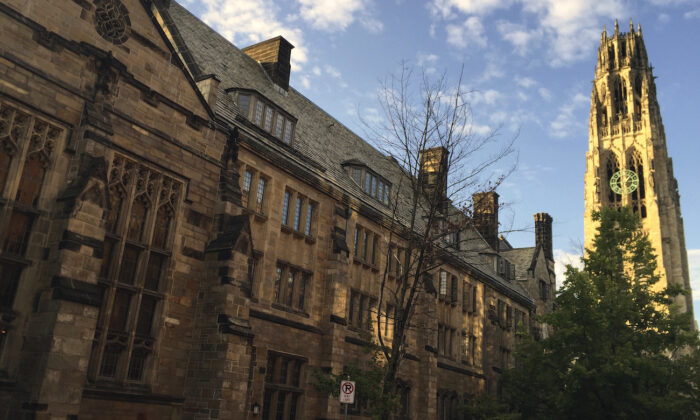 Harkness Tower on the campus of Yale University in New Haven, Conn., on Sept. 9, 2016. (AP Photo/Beth J. Harpaz)
US News

Yale University was found to have illegally discriminated against Asian American and white applicants in its undergraduate admissions process, the Department of Justice announced on Friday following a two-year-investigation.

The DOJ found that the Ivy League school violated the Title VI of the 1964 Civil Rights Act—a civil-rights law that prohibits discrimination on the basis of race, color, and national origin in programs and activities receiving federal financial assistance. In particular, the department found that Yale discriminates based on race and national origin in its undergraduate process. The DOJ has notified Yale (pdf) of its findings.

“There is no such thing as a nice form of race discrimination,” Assistant Attorney General Eric Dreiband for the Civil Rights Division said in a statement. “Unlawfully dividing Americans into racial and ethnic blocs fosters stereotypes, bitterness, and division. … The Department of Justice agrees and will continue to fight for the civil rights of all people throughout our nation.”

Following its findings, the DOJ has demanded that Yale “agree not to use race or national origin in its upcoming 2020-2021 undergraduate admissions cycle.” It adds that if the university plans to consider race or national origin in future admissions cycles, it has to “first submit to the Department of Justice a plan demonstrating its proposal is narrowly tailored as required by law, including by identifying a date for the end of race discrimination.”

In an emailed statement to The Epoch Times, the university said it “categorically denies” the DOJ allegation. It said it is proud of its admissions practices and “will not change them on the basis of such a meritless, hasty accusation.”

When the DOJ started its investigation in September 2018, Yale President Peter Salovey issued an open letter to the Yale community, where he stated that “Yale does not discriminate in admissions against Asian Americans or any other racial or ethnic group.” He also wrote that “Yale’s policies have resulted in an outstanding and increasingly diverse student body,” which “has not come at the expense of applicants of any racial or ethnic background.”

But the DOJ has said its investigation found that “race is the determinative factor in hundreds of admissions decisions each year” at Yale, and that for the “great majority” of applicants, “Asian Americans and whites have only one-tenth to one-fourth of the likelihood of admission as African American applicants with comparable academic credentials.”

“Yale rejects scores of Asian American and white applicants each year based on their race, whom it otherwise would admit,” the DOJ said, adding, “Although the Supreme Court has held that colleges receiving federal funds may consider applicants’ race in certain limited circumstances as one of a number of factors, the Department of Justice found Yale’s use of race is anything but limited.”

“Yale uses race at multiple steps of its admissions process resulting in a multiplied effect of race on an applicant’s likelihood of admission, and Yale racially balances its classes,” the DOJ announced.

Yale said in a statement to The Epoch Times that it is “dismayed that the DOJ has made its determination before allowing Yale to provide all the information the Department has requested thus far,” adding that it has been fully cooperating with the DOJ’s investigation.

“Had the Department fully received and fairly weighed this information, it would have concluded that Yale’s practices absolutely comply with decades of Supreme Court precedent,” the university said.

Yale said its selection process looks at “the whole person” and considers “a multitude of factors, including their academic achievement, interests, demonstrated leadership, background, success in taking maximum advantage of their secondary school and community resources, and the likelihood that they will contribute to the Yale community and the world.”

The DOJ previously accused Harvard University of racial discrimination in its admissions process, and in August 2018 made its argument in documents filed in federal court, saying that Harvard had “failed to show that it does not unlawfully discriminate against Asian Americans.”

Then-U.S. Attorney General Jeff Sessions said in a statement at the time that “no American should be denied admission to school because of their race.”

A federal judge in October 2019 ruled that Harvard’s affirmative action policies—alleged to be racially discriminatory against and adversely affects Asian Americans—were legally sound. Massachusetts-based District Judge Allison Burroughs, an Obama appointee, wrote that “race-conscious admissions will always penalize to some extent the groups that are not being advantaged by the process, but this is justified by the compelling interest in diversity and all the benefits that flow from a diverse college population.”

The ruling, based on Burroughs’s argument that “diversity” considerations are more important than the adverse affects to impacted individuals, has been appealed, with arguments scheduled in September.

The DOJ also filed an amicus brief for the case, with Dreiband commenting that, “Unconstitutionally partitioning Americans into racial and ethnic blocs harms all involved by fostering stereotypes, bitterness, and division among the American people.

“The Department of Justice will continue to fight against illegal race discrimination,” he said.

The case may ultimately reach the Supreme Court.

Janita Kan and Matthew Vadum contributed to this report.