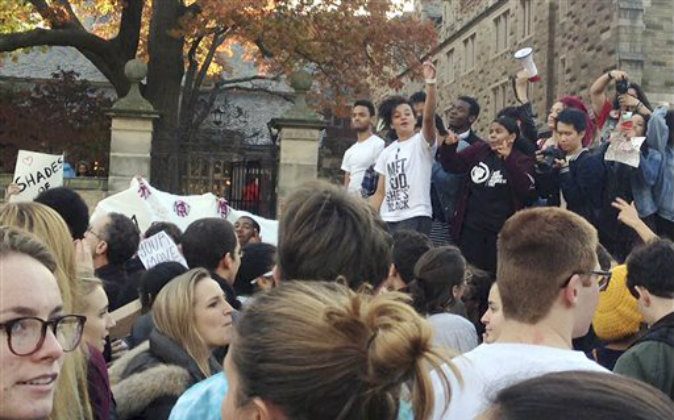 Yale University students and supporters participate in a march across campus to demonstrate against what they see as racial insensitivity at the Ivy League school on Monday, Nov. 9, 2015, in New Haven, Conn. (Ryan Flynn/New Haven Register via AP)
US

A back-and-forth over Halloween costumes at Yale University that has ramped up to emotionally high levels has attracted nationwide attention in the latest debate involving free speech and censorship.

The situation started when faculty members sent an email to students advising them to think hard about their costumes so that they wouldn’t disrespect or ridicule others.

“Halloween is also unfortunately a time when the normal thoughtfulness and sensitivity of most Yale students can sometimes be forgotten and some poor decisions can be made including wearing feathered headdresses, turbans, wearing ‘war paint’ or modifying skin tone or wearing blackface or redface. These same issues and examples of cultural appropriation and/or misrepresentation are increasingly surfacing with representations of Asians and Latinos,” the teachers wrote.

But some students were upset over what they saw as restricting their free expression, and went to Erika Christakis, who presides over one of the university’s undergraduate colleges as a live-in guide.

She sent out an email to that college’s students and faculty, advising them to take the opportunity to reflect on the issues the original email raised.

“I don’t wish to trivialize genuine concerns about cultural and personal representation, and other challenges to our lived experience in a plural community. I know that many decent people have proposed guidelines on Halloween costumes from a spirit of avoiding hurt and offense. I laud those goals, in theory, as most of us do. But in practice, I wonder if we should reflect more transparently, as a community, on the consequences of an institutional (which is to say: bureaucratic and administrative) exercise of implied control over college students,” she wrote.

Christakis noted that pretend play is part of childhood development and noted it’s tough to distinguish good from bad in such a case.

“As a former preschool teacher, for example, it is hard for me to give credence to a claim that there is something objectionably ‘appropriative’ about a blonde-haired child’s wanting to be Mulan for a day. Pretend play is the foundation of most cognitive tasks, and it seems to me that we want to be in the business of encouraging the exercise of imagination, not constraining it,” she added.

“I suppose we could agree that there is a difference between fantasizing about an individual character vs. appropriating a culture, wholesale, the latter of which could be seen as (tacky)(offensive)(jejeune)(hurtful), take your pick. But, then, I wonder what is the statute of limitations on dreaming of dressing as Tiana the Frog Princess if you aren’t a black girl from New Orleans? Is it okay if you are eight, but not 18? I don’t know the answer to these questions; they seem unanswerable. Or at the least, they put us on slippery terrain that I, for one, prefer not to cross.”

In the end she concluded by wondering whose business it is to control people’s costumes, and said “It’s not mine, I know that.”

Some students took offense to the email, and want an apology from Christakis. Note: Video includes coarse language.

They surrounded her husband on campus. He’s the “master”–a professor who lives on the campus with his wife, helping to form life at the college. “Masters work with students to shape each residential college community,” Yale states, “bringing their own distinct social, cultural, and intellectual influences to the colleges.”

Students confronted him, telling him that the email his wife sent out goes against his job to “create a place of comfort and home.”

But he said he doesn’t agree, saying it’s about free speech.

Nicholas Christakis listened and later invited students who disagree with him and his wife over for brunch at their home. Hundreds of these students have signed an open letter urging Erika Christakis to apologize, and if not, to be removed.

“This both trivializes the harm done by these tropes and infantilizes the student body to which the request was made.”

One of the most recent updates took place over the weekend, reported the Yale Daily News, when a group of students gathered outside a conference on freedom of speech, protesting the conference.

Students protested again on Monday, with an estimated 1,000 students marching across campus. They were protesting Halloween costume email and response, and also claims that a black girl was refused entry to a frat party.