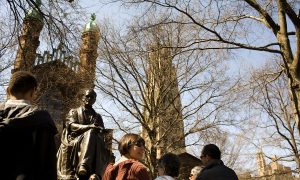 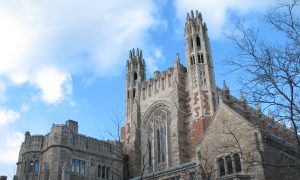 New Report Blasts Yale, Other US Universities for ‘Neo-Segregation’
0 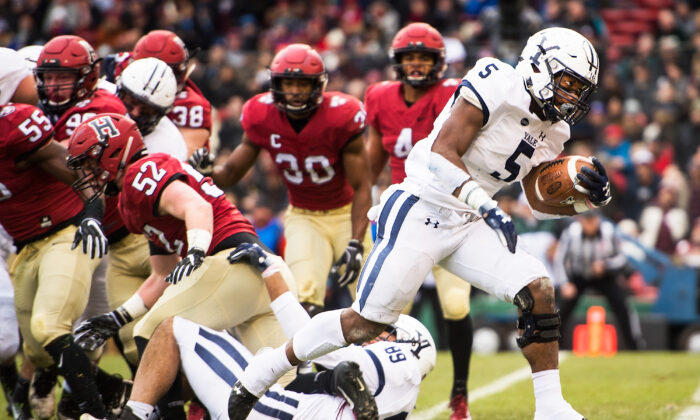 Alan Lamar #5 of the Yale Bulldogs scores a touchdown during a game against the Harvard Crimson at Fenway Park on Nov. 17, 2018 in Boston, Mass. (Adam Glanzman/Getty Images)
Viewpoints

Yale Protests Show It’s Not the School It Once Was

Yale, the school I love, just can’t seem to get out of its own way lately.

At the Nov. 23 football game against Harvard, something like a thousand students occupied the field for almost an hour. Where “The Game” once had a grand tradition of student pranks, one senses it will now just be another opportunity to showcase protest culture.

To be fair, Harvard students were involved as well, but where PC outrage culture is concerned, Yale always seems to be front and center.

There have been many times in recent years when I’ve felt acute embarrassment about the latest developments from campus. There was, of course, the “screaming girl” incident where students harassed, hectored, and threatened a prominent professor over the issue of Halloween costumes (look it up on YouTube, it’s shocking). Rather than being expelled, at least two of those students were given awards at graduation for promoting racial comity.

There was the covering of a stone carving because it depicted a pilgrim with a musket. There was the free speech conference that 200 students tried to shut down. I was at that one. On a more personal level, there was the undergraduate woman who accused me of patriarchy for holding a door for her at my last reunion.

Incidents like those prompted me to write the satirical novel “Campusland,” but recent events remind me that it wasn’t satire at all.

Don’t get me wrong, the students have every right to protest, but this was the wrong place and the wrong time. By holding up the game for almost an hour, they placed Yale in a position where they might have had to forfeit. Imagine being one of the seniors who’d worked so hard for this moment—a Harvard–Yale game with the Ivy League championship on the line—only to forfeit? How is that fair to them, their families, and the legion of fans who paid to see the game?

As it was, the delay pushed the game into darkness, finally ending 15 minutes after sunset. It was almost impossible to see, and the refs would have pulled the plug if it had gone even a few minutes longer.

Did the seemingly jubilant, chanting protesters think about any of this? No. It was a supremely selfish act, a grand display of virtue signaling. Self-admiration practically emanated in waves from the field, along with a puerile need to be the center of attention.

What were they protesting? Climate change, but it hardly matters. It’s political theater. Next week it will be something else. Yale is in the full throes of outrage culture in which protests are ends unto themselves. This is something Yale has brought upon itself. For one, there are never any consequences for bad behavior. The children at the game knew they could have a temper tantrum on national television and fully expect campus kudos, maybe even awards at graduation.

For another, those students got into Yale precisely because they did things like disrupt football games with protests. The admissions office prizes social justice applicants above all. (Note to the development office: Good luck getting them to give back after they graduate. They have been trained to hate the very school they attend, and feel no gratitude for the scholarships you gave them.)

The culture has to change. Yale needs new leadership and a new admissions staff. It needs to cut way back on its bloated bureaucracy. Unfortunately, none of this will happen as long as faithful alums keep writing checks. Alumni need to start asking hard questions, because the school they think they’re giving money to is not the one they knew.

Scott Johnston is the author of the best-selling novel “Campusland.” He is a graduate of Yale and a former finance and tech executive.