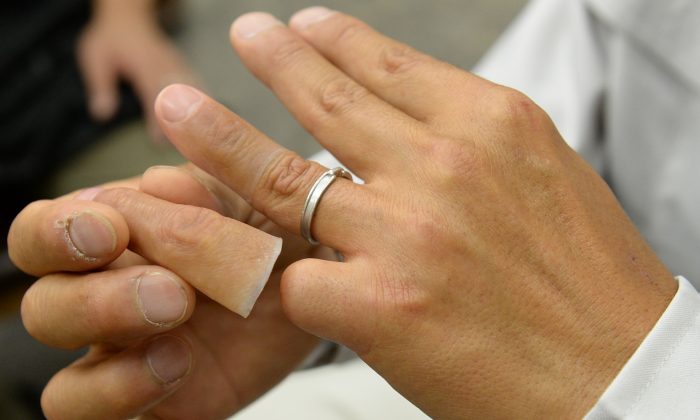 In this picture taken on on May 27, 2013, a 53-year-old former yakuza gangster shows off his silicone-made finger during a visit to prosthetics specialist Shintaro Hayashi's office in Tokyo. (Toshifumi Kitamura/AFP/Getty Images)
Asia & Pacific

Adelstein, who used to work at Yomiuri, has a bestselling memoir “Tokyo Vice” set to become a movie.

He says that mobsters are switching from tough guy personas to clean-cut looks that can work in any board room.

“They’re savvy investors,” he said. “They like to gamble.”

The mobsters are notorious for wreaking havoc in sections of Japanese society for decades, extorting money in similar fashions to the Mafia in Italy and the U.S.

The move to other ways to make money comes as membership is quickly falling as police crack down on the organized crime, experts said.

“Crime syndicates…are out to make money, and they’ll use whatever means available,” said one anonymous person familiar with the mobsters.

Unlike the Mafia and some other groups, the Yakuza perch on the edge of society, being legal groups but still closely watched.

Nowadays, Tokyo is under pressure to deal more with the mobsters.