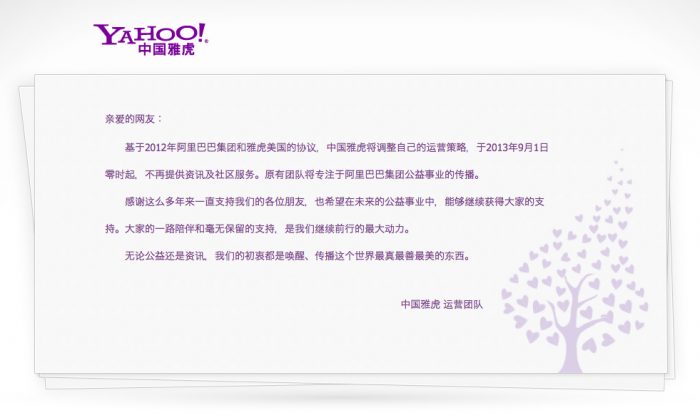 Yahoo Shuts Down in China After Slow Cutback

The portal is run by U.S. e-commerce company Alibaba Group, which said in a statement Saturday that the Yahoo China team, now fewer than 100 employees, will look after the company’s public welfare program. The site is redirecting to now.taobao.com.

Yahoo entered China in 1998, and saw success in the early 2000s, but business has been ailing for the past few years since Alibaba began operating the site in 2005. Both Yahoo’s market share and the number of users have declined.

Analyst Li Zhi at research firm Analysys International in Bejing told TechWorld that Alibaba probably has no further use for the brand.
“China Yahoo has been under Alibaba for many years. Its most valuable properties have been dismembered and used,” she said. “Alibaba already has no need for a China Yahoo that’s been squeezed dry.”

Other U.S. Internet giants, like Google and Amazon, have faced difficulties in China from a variety of sources, such as censorship by the Communist Party, ineffective localization to suit netizens’ habits and preferences, and competition from local brands like Tencent.

A netizen in Yunnan used the tone of Party propaganda to joke about the news on his Weibo microblog: “Another international Internet giant falls in China. Imperialists escape with their tails hidden. The invincible *** [Communist Party] has won another great victory.”