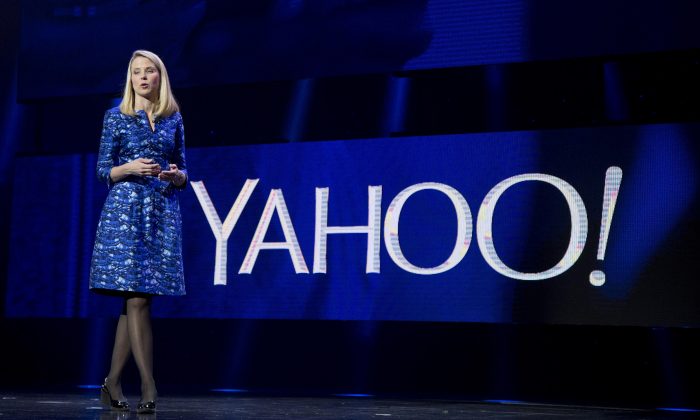 Yahoo President and CEO Marissa Mayer speaks during the International Consumer Electronics Show in Las Vegas on Jan. 7, 2014. Mayer’s nearly four-year attempt to turn around Yahoo needs a turnaround itself, repeating a pattern of futility that has hobbled one of the Internet’s best-known companies for the past decade. (AP Photo/Julie Jacobson)
Business & Economy

SAN FRANCISCO—Yahoo’s board is considering an activist shareholder’s demand to sell the Internet services the company is best known for, a maneuver that might help the company dodge a tax bill of more than $10 billion looming over its holdings in China’s Alibaba Group.

The boardroom intrigue revolves around a recent proposal from Starboard Value, a New York hedge fund that been pressuring Yahoo CEO Marissa Mayer to take dramatic steps to boost the company’s stock.

Starboard’s latest idea is for Yahoo to sell its websites, mobile applications, ad services and data analytics so it can abandon a plan to spin off its 15 percent stake in Alibaba, a thriving e-commerce company. The spinoff is designed to shelter Yahoo from capital-gains taxes on its investment, but it’s unclear if the strategy will work. Earlier this year, the Internal Revenue Service declined to guarantee that it would qualify for a tax exemption.

The Wall Street Journal first reported the board will consider selling Yahoo’s Internet business, citing people familiar with the situation. The drama began unfolding Wednesday during a meeting that Yahoo’s board of directors holds in early December each year.

Yahoo Inc. declined to comment on the board’s agenda. The company’s advisers, though, have expressed confidence that taxes won’t be due in the spinoff, emboldening Mayer and the rest of the board to continue pursuing a breakup that is supposed to be completed later this month or in January.

Mayer is also working on a major overhaul that will jettison an unspecified number of unprofitable Yahoo services and could lay off hundreds of workers. She has promised to provide further details next month.

It could take three years for the tax uncertainty surrounding the proposed Alibaba spinoff to be resolved, Nomura analyst Anthony DiClemente wrote in a note Wednesday.

Starboard’s demand evidently prodded the board to consider an alternative way to avoid a tax bill that could wipe out more than two-thirds of the gain on Yahoo’s Alibaba stake, which was acquired a decade ago for $1 billion and is currently worth $33 billion. If Yahoo’s board sticks to the Alibaba spinoff, Starboard is threatening to lead an attempt to oust the nine directors next year.

Analysts have estimated that Yahoo could end up paying anywhere from $10.5 billion to $19 billion in taxes, depending on whether China also demands payment on the gains. The potential bill dwarfs the estimated value of Yahoo’s operating business, which analysts peg at $2 billion to $4 billion, after subtracting the roughly $7 billion that the company has in the bank.

Yahoo’s business has declined in value largely because its net revenue has fallen under Mayer even though advertisers are pouring more money into digital marketing. Most of the dollars, though, are flowing to rivals Google and Facebook.

If Starboard’s scenario is embraced, Yahoo’s best-known services and, most likely, its brand would be taken over by a new owner, leaving the company as a shell for stakes in Alibaba and Yahoo Japan. Outsell analyst Randy Giusto believes AT&T Inc. might be interested in buying Yahoo’s services, taking a page from rival telecommunications provider Verizon Communications, which bought AOL for $4.4 billion earlier this year. Other potential suitors include a long list of investment firms that specialize in taking companies private and cutting costs.

Investors have become increasingly disillusioned with the Alibaba spinoff because of the potential tax hit. Wall Street also has grown restless with Mayer’s inability to boost Yahoo’s revenue after three-and-half years on the job.