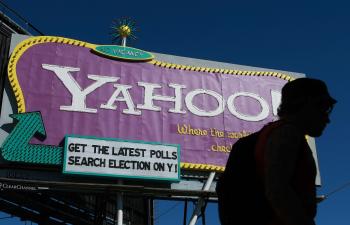 By Ram Srinivasan
biggersmaller
Print
NEW YORK—Yahoo announced a fourth-quarter loss of $303 million, or 22 cents a share, its first decline in sales since 2001. The quarterly loss also marks the end of Jerry Yang’s tumultuous tenure as chief executive for 18 months.

Yahoo said it incurred a $108 million charge related to severance and layoffs and a $488 million “goodwill” write-downs for some of its European assets.

Carol Bratz, Yahoo’s new chief executive, announced her first results for the company since she was named to the position two weeks ago. Last year, the company announced earnings of $206 million for the same quarter.

Pressed again and again by stockholders and analysts about whether she would consider selling the company, Bratz said, “This is a fantastic Internet property that doesn't deserve everybody trying to pick it, and pull it, apart."

But she also made it clear that she was open to all options. "My job is to make sure that as a company, we look at anything that makes sense long-term and creates shareholder value," she told analysts at a conference call. "If there's something interesting to look at, we'll look at it."

Yahoo has been struggling to catch up with market leader Google, which reported an 18% jump in fourth-quarter revenue to $5.7 billion a week ago. The downturn in the economy has also affected its online sales.

Yahoo depends heavily on display ads to drive revenue. Its share of the search advertising market has been largely ceded to Google, which accounts for more than 60% of online search traffic, according to a comScore estimate.

Jerry Yang, who founded Yahoo and took over as chief executive in 2006, made an ignominious exit after he, and the board of directors at that time, turned down Microsoft’s $47.5 billion offer last year to take over the company. The spurning of Microsoft led to a sharp fall in Yahoo’s share price, and investors led by corporate raider Carl Icahn threatened a hostile proxy war to take over the company’s reins. Yahoo eventually had to acquiesce to stockholder anger, adding new directors and removing old ones, and finally forcing Yang to step down from his position late last year.