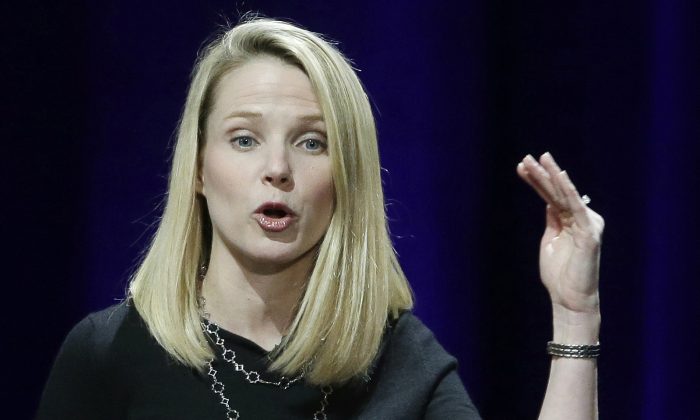 Yahoo CEO Could Reap $44 Million If She Leaves After Sale

SAN FRANCISCO—Yahoo CEO Marissa Mayer stands to collect a $44 million severance package if she leaves after Verizon completes its purchase of the once-mighty internet company.

The 41-year-old executive stands to collect $3 million in cash and almost $41 million worth of stock options and awards under a “golden parachute” agreement described in a regulatory filing Friday. In a filing last spring, Yahoo said Mayer could walk away with $55 million in compensation, but the estimates can vary with the value of Yahoo’s stock and the date she leaves.

Mayer has been CEO for four years but failed to reverse a long-standing slide in Yahoo’s advertising business. After an unsuccessful effort to spin off its investment in the Chinese internet giant Alibaba, Yahoo Inc. began entertaining offers for its core business earlier this year.

Yahoo weighed a variety of offers, according to the proxy statement filed Friday. One was a merger proposal from Yahoo Japan, a separate company that Sunnyvale, California-based Yahoo co-owns with Japanese tech giant SoftBank. Another bid came from an unnamed group that asked Yahoo co-founder David Filo to consider financing its bid.

Filo, who sits on Yahoo’s board of directors, agreed to talk with the group and recused himself from participating in further board discussions about a possible sale, according to the statement. The filing doesn’t say if Filo ultimately decided to join the group. But in the end, the unnamed group submitted a $4.35 billion bid that was lower than Verizon’s.

Verizon hasn’t spelled out its plans but it’s expected to continue operating at least some of Yahoo’s popular internet sites under the familiar brand, while combining some of its ad business with the AOL operation it acquired earlier. A separate holding company, under a new name, will keep Yahoo’s stake in Alibaba and some other investments.