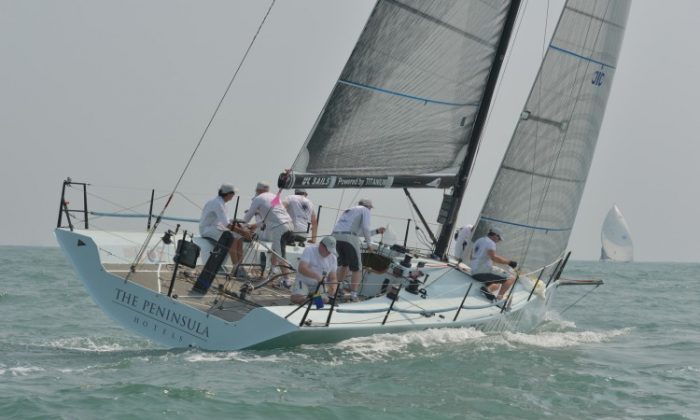 'Peninsula Signal 8' ... After coming first in Race 5 and second in Race 6, 'Peninsula Signal 8' still has a very good chance of pipping 'Vixen' to the title in the Hebe Haven Winter Saturday Series, which comes to a climax on Saturday Dec 15. She is seen here competing in the St Regis China Coast Regatta. (Bill Cox/The Epoch Times)
News

With two races left and the possibility of two race discards, the Hebe Haven Winter Saturday Series 2012 is nearing a very interesting climax. Provided the boats in contention all take part in this coming Saturday’s race programme, it all looks like being an intriguing day of racing.

In Races 5 and 6, which took place on Saturday Dec 1, a number of important occurrences happened in both the IRC and HKPN Classes.

Competing in the IRC division, after missing the second race day, Peninsula Signal 8 came back to win first place in Race 5 and second place in Race 6; while Mojito, who did not compete in the earlier races, took second and first places, respectively, in these two races. These performances pushed leader Vixen down to third place in those races.

The overall position in the series now shows Vixen still leading on 13 points, with Peninsula Signal 8 tied in second place, with Stingray on 25 points. But if two discards are allowed, Peninsula Signal 8 would be leading the Series on 5 points at this stage, Vixen second on 7 points and Stingray on 13 points. If both Vixen and Signal 8 take part in the final two races, it looks like they will be in a head-to-head battle for the IRC title.

The inclusion of more SMS boats in the HKPN section in Races 5 and 6 pushed many of the contenders in that division down the order. Merlin won both races, while Sidewinder and Black Magic were both well in contention, pushing Kyte down to third and fifth. Jazz came in fifth and sixth and Bits & Pieces finished down in seventh place in both races.

In overall series terms, Kyte is still leading on 19 points, Bits & Pieces is tied together with Jive (Louie Tang) and Jazz (Eliza Yeung) on 31 points, while Windseeker is on 32.

Merlin on 38 and Ichiban on 44 are too far behind one might think. However, when two race discards are taken into account, the current position would be: Kyte on 10 points, Bits & Pieces on 16, Jive on 15, Jazz on 19 and, significantly well in contention for the series title, Merlin and Ichiban would come up to 10 and 16, respectively.

Once again, it is very much all to play—or sail—for in the final two races of the Winter Saturday Series scheduled for this coming Saturday Dec 15.