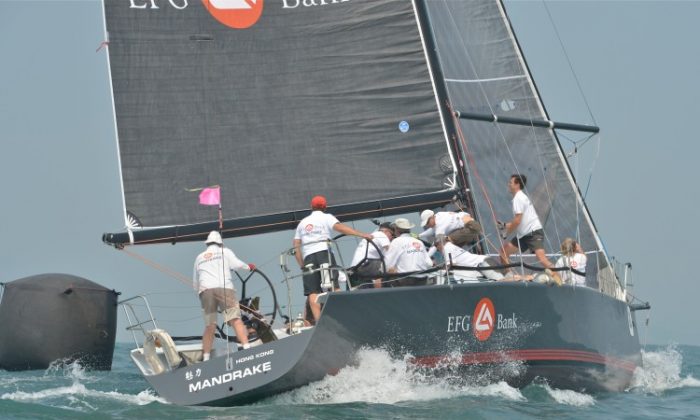 Yachting: Successful China Coast Regatta, But Not a Classic

Light winds reduced the number of races that could be held in Royal Hong Kong Yacht Club’s regatta last weekend.

The St Regis International China Coast Regatta took place in the waters south of Hong Kong Island, with seven races planned for IRC races and five races for the Cruising and HKPN Classes from Friday Oct 12 until Sunday Oct 14.

Because of the light winds, all IRC and HKPN boats competed over a total of five races, whereas the cruisers Classes were reduced to four races. Full race schedules were completed on Days 1 and 3 of the Regatta. There was a delayed start on Day 2, and although the wind was blowing at about seven knots for the first race, it then died and the other races for the day were cancelled. Two races were completed on Day 3. In total, two races were lost for the IRC Racing Classes and one race was cancelled for the HKPN boats.

Twenty-five boats took part in the IRC Racing Classes and a further 12 boats entered the IRC Cruising and HKPN Classes. The races consisted of a combination of geometric and island courses, but some were shortened taking account of the poor wind conditions—although successful and well organised, it could not be considered a “Classic”.

There was a remarkable consistency to the results in nearly all of the classes.

Mr Sam Chan’s FreeFire had a wonderful regatta, winning all of the races on corrected time and taking the overall title ahead of Jelik 5, who was also consistently in second place, with Vineta taking third place.

Peninsula Signal 8, as well as taking line honours in all races, won three of the five races in this category, but due to one poor performance in Race 6, she was pushed into second place overall by EFG Bank Mandrake. Krumpus, Stella and Electra all featured in the top results in this class.

Red Kite II dominated this series of races, taking line honours and first place on corrected time in all five races, and Vixen was also consistently in second place. China Cup No. 9 performed well to take third place overall, with Whiskey Jack in fourth spot ahead of Gambit.

In the IRC-Classic Cruising class, Authority took line honours in one race and won all four races on corrected time. Blackjack achieved three line honours and finished second overall ahead of Kei Lun.

In the IRC-Premier Cruising class, Zena led Lighthorse and were in good form coming in first and second in all four races.

In the HKPN, it was Goodwill that took line honours in all four races and took the overall class prize. She was followed by Zanadu II, Darling and No One Else, respectively.