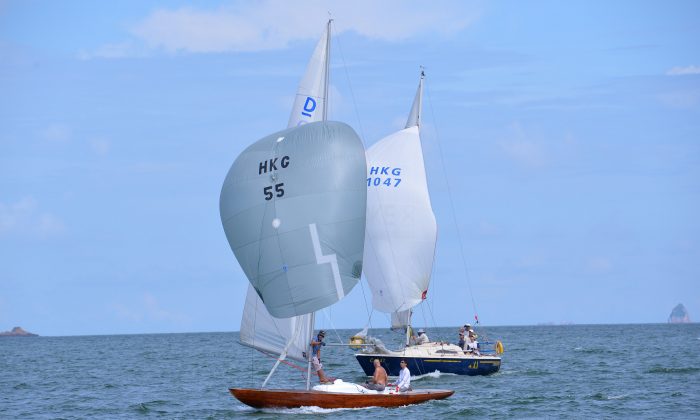 ‘Dragon class’ ‘Puff’ ahead of IRC’s ‘Taxi’ ... These were both double winners of their respective classifications on Day-3 of the Hebe Haven Summer Saturday series on July 6, 2013. ‘Puff’ has a perfect score in the six races now completed and ‘Taxi’ is also heading the IRC series standings. (Bill Cox/Epoch Times)
International

“Fast and furious” was the way Race Officer Colm Anderson described Race Day 3 of the Hebe Haven Quest Yachting Summer Saturday Series on July 6. A southerly wind touching up to 17 knots gave the boats some impetus and some fast times were recorded on the short geometric courses.

It was great to see the boats with bulging spinnakers and getting a bit of heeling action from the wind.

In IRC class, “Taxi” continued her good performances in picking up another two first places in Races 5 and 6, keeping “Taxi’s” overall score for the series down to 10 after six races.

Big boats “Stella”, “Talking Head” and “Lighthorse” got ahead of the other Impalas in Race-5, but it was business as usual in Race-6 with “Taxi”, “Impala I” and “Moll” keeping the big boats at bay.

When two discards are taken into account after completing eight races, the points between the boats will shrink and, although on current figures, “Taxi” would still lead the points, but between the next four boats could be as little as five points.

“Signal 8” missed Race Day-3. Although she took first place in the only race she has entered in the series so far, having now reached the half way mark of the event, time is running out for “Signal 8” to make a major impression.

It seems that of the big boats “Stella” is the most likely to make the series prizes in this division, although “Barnstormer”, “Talking Head” and “Lighthorse” may still prove me wrong.

After “middle of the road” performances in the first three races of this series “Getafix” has turned her series around by producing a winning result in Race 4—and took first place in both of the races on Race Day-3. As a result she has jumped from seventh to second place in the HKPN division standings.

“Ichiban”, a late starter in the series, came in with a second place finish, but in the second race (Race 6) she was adjudged OCS (On Course Side) pushing her to the bottom of the order.

“Kyte”, the HKPN series standings leader after Race-4, also suffered the same fate, which has temporarily pushed her down to fourth place in the series rankings.

“Little Sheep” found the going a bit slow and retired from each of the two races, while “GA” and “Windseeker” recovered from middle order finishes in Race-5 to take second and third places respectively in Race-6.

In the overall standings there is still little between the first six places and although “Kyte” and “Jazz” have now dropped down the series standings to fourth and fifth respectively, they should recover their positions when discards are allowed. “JeNa PaBe” currently leads the series standings from “Getafix” and “Bits & Pieces”.

Steve Bourne in “Merlin” piled on the pressure in the Sport Boats category with two more wins.

“Stingray”, back to her normal self after losing the “drag net” from her keel, alternated with “Phoenix” in picking up second and third places in the two races.

Last year’s series winner in the SMS Sports Boats classification, “Merlin” is now 14-points clear of “Phoenix” at the top of the standings, with “Stingray” in third place. These three boats are 7-points or more ahead of the other contestants in the division, but there is still time for “Fly By Wire” and “Good Vibrations” to make a come-back if the full compliment of 12 races are run, allowing four discards.

“Puff” continues to dominate the Dragon class with her sixth win in a row.

Mixed fortunes in these two races for “Moonraker II” with a fifth and second place, and “Maiden of Hong Kong” with a second and seventh place, just increases the gap between the leading “Puff” and these two boats.

With two discards looming after Race Day-4 on July 20, most boats in all classes need to look at how these will affect their positions.

However, in the Dragon class, “Puff” has no calculation to make – with her perfect score to-date, she is certain to have a net score of six points after eight races and will be guaranteed first place in the series if she can notch up two more wins in the next two races. So it looks like the fight will be for second and third places.