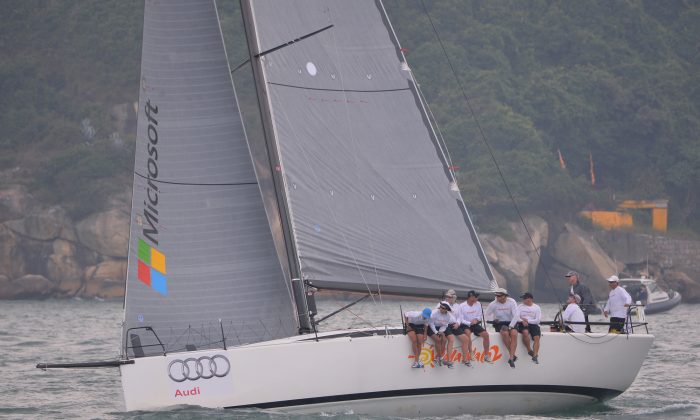 ‘Walawala 2’ (Sydney GTS 43) skippered by Steven Manning lost a rudder and took on water 130 Nm into the 656 mile race from Hong Kong to Vietnam and subsequently abandoned ship.

RHKYC Sailing Manager Alex Johnston was alerted at 01.35 local Hong Kong time and the decision to abandon ship was made at 01.45 when the yacht’s life raft was deployed according to the RHKYC Media Report. The report also confirmed that all 10 of the crew multinational crew (British, New Zealand, Australia, Singapore, and Canada) were safe and no injuries were sustained.

‘Krampus’ (Anteros 36) the nearest boat to ‘Walawala 2’ diverted to assist and picked up the crew which was achieved by 04.05.

MRCC (Maritime Rescue Coordination Centre) activated a rescue plan involving Hong Kong Government Flying Services arriving at the incident site by 04.40. Eight of the ten crew were winched onboard the helicopter and returned to Hong Kong. However, because of the distance from Hong Kong (130Nm), time at the rescue site was limited and only eight of the ten crew could be hauled aloft.

The other two crew members remained on Krampus who subsequently decided to retire from the race and return to Hong Kong.

‘Red Kite II’ was leading the IRC Racing-2 class ahead of ‘Surfdude’, ‘Sell Side Dream’ and ‘Sea Monkey’. Final positions are decided on calculated times according IRC ratings.

Catamaran, Mach 2 was leading the HKPN class just 40 Nm behind the leader Ragamuffin 90.