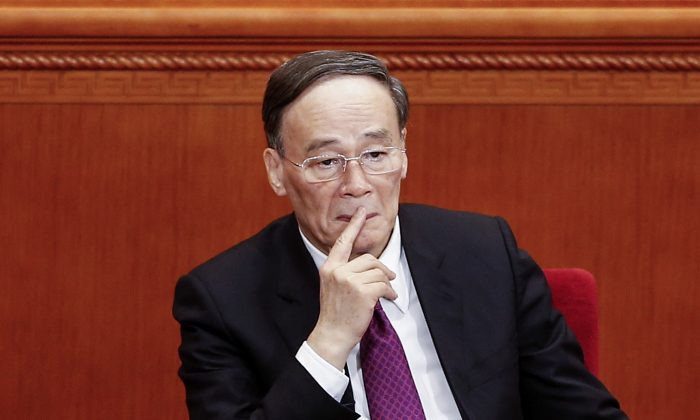 Wang Qishan, China’s most powerful official after Communist Party leader Xi Jinping, has made a series of public appearances recently, after having disappeared from public view for months. Wang’s absence from the media led to speculation about his political future, to which he retorted with three appearances in the space of a week. Such appearances are bellwethers of political vitality in China’s opaque political system.

At the meeting, Wang stressed the importance of reflecting on the results of anti-corruption work carried out since Xi Jinping took power in 2012, and expressed resolve to continue with “unremitting efforts.”

Observers of Chinese politics closely watch signs of Wang’s presence (or absence) in the media for hints on whether he will continue to serve in the Politburo Standing Committee after the leadership reshuffling at the Communist Party’s 19th National Congress. The Standing Committee is the Party’s executive leadership and is composed of seven cadres, including Wang and Xi, who heads the body.

According to an unofficial convention of the regime, members of the Standing Committee who reach the age of 68 at the time of the Party Congress are expected to retire; officials aged 67 or younger may stay for the next five-year term. Wang Qishan, who is a key ally for Xi Jinping in his anti-corruption campaign, turned 69 this July.

Two days before Wang appeared on television, he attended a political seminar honoring his late father-in-law, the former vice premier Yao Yilin. Wang was accompanied by his wife and eldest grandson.

Wang was also addressed, apparently for the first time by Chinese state media, as the leader of the “Central Leading Group for Inspection Work.”

From Sept. 3 to 5, Wang also paid a three-day visit to the central Chinese province of Hunan where he held a discipline inspection symposium, as reported both on CCTV and the official website of the Central Commission for Discipline Inspection that Wang heads.

Given Wang’s tendency to keep a low profile, the prominent media exposure is highly unusual, and has been seen as a pointed rebuttal of rumors that he has been diagnosed of late stage liver cancer. Independent political commentator Zhou Xiaohui says the media reports should also be read as a hint that Wang remains in Xi Jinping’s favor.

Since May, Guo Wengui, a fugitive Chinese billionaire who resides in an $67 million luxury apartment in Manhattan overlooking Central Park, has made various unproven corruption charges against Wang and his family members using social media. Guo has been linked with the political network grouped around former Party leader Jiang Zemin; the anti-corruption campaign under Xi and Wang has targeted hundreds of cadres aligned with Jiang. Guo faces a number of lawsuits from Chinese officials, actresses, and businesses for unpaid debts and defamation.

Xin Ziling, a retired official at the National Defense University, believes that Wang’s political position is protected on account of the indispensable role he plays in Xi’s administration.

“Xi Jinping, Li Keqiang, and Wang Qishan are going to be the core in the 19th National Congress,” Xin told The Epoch Times. Li Keqiang is the premier. “If they take down Wang Qishan, it’s effectively saying that Xi’s anti-corruption effort was wrong.”

“Once you shoot the arrow, there’s no getting it back,” Zhou Xiaohui said. “The tone coming from state media has been that anti-corruption is going to continue, and Xi would be handicapping himself if he loses Wang Qishan.”

Wang’s absence has typically been associated with the purge of “big tigers”—the Chinese term for high-ranking corrupt officials. The last time Wang returned to public view after 40 days of silence, the authorities announced the investigation of prominent Chongqing Party secretary Sun Zhengcai, extinguishing the hopes in some quarters that he would be a candidate for succeeding Xi Jinping in the leadership.