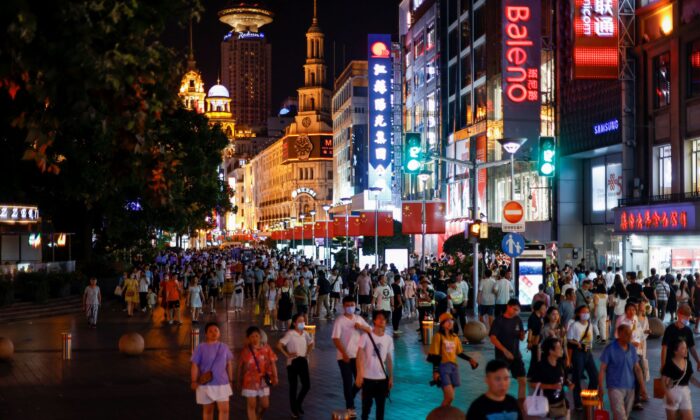 Xi’s Crackdown on ‘Everything’ Is Destroying China’s Economy

Beijing has rolled out new regulations that could destroy various industries in China, including entertainment, tech, private education, and gaming.

Xi Jinping is cracking down on celebrities, as well as Western influence in Chinese culture. He wants to reform capital markets so they will not be places where the rich can get rich quickly. The CCP leader is also not fond of videos games and has ordered that children be limited to one hour per day—Friday, Saturday, and Sunday only. The Bitcoin miners have also become targets for elimination, as they waste state resources. And, although tech companies have been the backbone of China’s transformation from poverty to prosperity, Xi has decided that he hates them too. Somehow, Xi claims that all of these new prohibitions are tied to amending China’s massive wealth gap.

In order to tame, what he calls, the country’s rampant fan culture, Xi has banned social media platforms from publishing popularity lists or selling celebrity merchandise. Online celebrities and influencers, modelled on androgynous K-pop stars, draw large numbers of fans who spend money to help them win contests. But not anymore. Xi is waging war on both, celebrities and their fans, in order to eliminate “improper idol worship.”

Tattoos and earrings on men will no longer be tolerated on TV, not even in sports. Certain talent TV shows have been banned. “Correct beauty standards” will be implemented, and entertainers are being cautioned not to be “overly entertaining.” The CCP sees celebrities and entertaining TV shows as distracting citizens from their love for and obedience to the Party. Celebrities are now being arrested on various charges, including tax evasion, having their social media accounts shut down, or having their names and work removed from the internet completely.

Jack Ma, founder of Alibaba, is perhaps the best example of Xi’s crackdown on big tech. Ma is one of the most famous Chinese people, known around the world. He is also the epitome of the tech billionaire. And it is perhaps this fame that attracted the ire of the Chinese regime. Last year, Beijing blocked the $34.5 billion IPO of his Ant Group. Shortly afterwards, Ma disappeared for almost three months.

The Jack Ma story may have served as a warning to other big-tech entrepreneurs, but when Xi gave a speech about “common prosperity” asking the wealthy, particularly the tech billionaires, to give back, they did. Xiaomi’s chairman, Lei Jun, gave away $2.2 billion in company shares to his charitable foundations. Additionally, five of China’s richest tech billionaires have pledged a total of more than $13 billion to charitable foundations. None have spoken out publicly against the new policies.

Gini coefficient is the measure of wealth disparity in a country. A Gini of 5 or more is cause for worry and a potential for social instability. In 2020, China’s Gini hit 70.4. While China has nearly as many billionaires as the United States, 600 million Chinese citizens have a monthly income of only $209. Therefore, China definitely has a wealth gap. The question is whether or not Beijing could or should do anything about it.

Economics teaches that markets generally bring about the most efficient outcomes, and that government intervention in markets always causes inefficiencies. Furthermore, there are countless examples, where government intervention has the exact opposite of its intended effect. In the case of Xi’s crackdowns, in order to help families that were struggling financially, Xi has put an end to for-profit tuition and supplemental education centers. And with that single pronouncement, he put 10 million people out of work. That most likely will not help struggling families, particularly after most of the country suffered months and months of COVID-19 lockdowns.

This blow comes while the nation, as a whole, is facing 5.5 percent urban unemployment. And this figure does not include tens of millions of unemployed migrant workers who have been laid off from factories. Neither does it include the 10 percent rate of unemployment among young people and new graduates, some of whom would probably have been very happy to work in a supplemental education center.

Chinese children will no longer be able to access extra English lessons, while the companies that used to teach them are going bankrupt. One of the larger supplemental education providers, Juren Education, declared bankruptcy, but fearing being accused of criticizing government policy, they told parents that they were closing shop because of “operational difficulties.”

It is estimated that China’s afterschool tutoring business was valued at 564 billion yuan (US$87.65 billion). This money has just evaporated from the economy. One of the reasons given for the decision to kill this golden goose was that in Chinese education, the state must control discourse and ideology. But in private tuition centers, the state had very little ability to do this.

The gaming industry was valued at over 377 billion yuan. Ostensibly, the new gaming restrictions will not drive this industry to zero, as it did with supplemental education, but the new restrictions must be expected to take a huge bite out of total revenues. Gaming was cancelled because the CCP felt the children were engaging in “spiritual opium,” which distracted them from Beijing’s “correct values.”

Xi has claimed to have a new economic plan—”Xiconomics” as well as the dual-circulation strategy, and “common prosperity” (a wealth redistribution scheme)—to mitigate wealth inequality and to help the country recover from COVID economy. The steps he is taking seem to be ones that would drive the economy down, not up. Additionally, these policies are eliminating much needed jobs. Even more, it was the tech sector that created high-paying jobs, moving Chinese workers out of toy factories and into cutting-edge offices and labs. Curbing the tech companies could move China back down the manufacturing value chain.

Tech companies are already required to have Party appointees on their boards, and with recent crackdowns, CEOs are getting nervous. Would-be investors also see the draconian steps as dramatically increasing risk, making Chinese tech investment less attractive. This should have a negative impact on Chinese innovation and access to capital, as well as on China’s long-term economic growth.

These policies do, however, provide the state a firmer control on the citizenry, on their culture, and their day-to-day lives, dictating how they relax, how they invest, and even which celebrities they are permitted to fantasize about. Parallel to all of these restrictions, the CCP announced that the teaching of “Xi Jinping Thought” would now be mandatory in primary and secondary schools, nationwide. It seems the only star permitted in China is Xi himself.