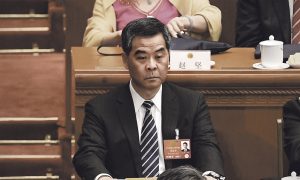 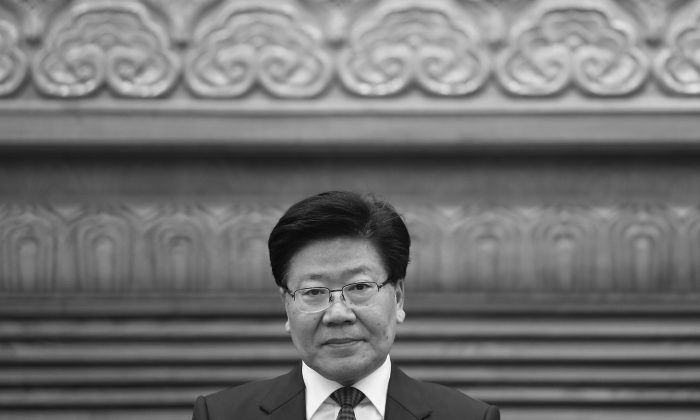 On the afternoon of March 8, the Xinjiang delegation of China’s National People’s Congress (NPC) opened up for media interviews. When the Xinjiang territory’s Chinese Communist Party (CCP) secretary, Zhang Chunxian, was asked if he supported Xi Jinping’s leadership, he responded, “Talk later.”

Zhang’s response to this obvious testing question asked by an overseas media has attracted wide attention and further interpretation. Although the related reports were quickly deleted, his response had already been spread.

Zhang undoubtedly sent a message to all levels of corrupt officials to say “no” to Xi, which is an indication of the intense wrestling between the Jiang and Xi factions of the CCP. Over the years, the Xinjiang region has become a Jiang faction stronghold for blackmailing Xi in the form of terrorist attacks.

Shi also said that if Jiang is not arrested quickly, more people will suffer from the terrorist acts.

At the end of last year, Xu Hairong, secretary of the Xinjiang Commission for Discipline Inspection, repeatedly published sharp comments on Xinjiang’s anti-terrorism and anti-separation issues. He said Xinjiang officials have “ambiguous attitudes” and “slow actions” on anti-separation issues, and they even support and participate in the “violent terrorist activities.”

These comments imply that the so-called Xinjiang “terrorism” is actually the Jiang faction’s troubling action against Xi’s authority.

In recent years, all kinds of negative news about Zhang has popped up. Several media reported that Zhang is under investigation and will be suspended for having connections with former security czar Zhou Yongkang’s case and other issues.

Zhang’s future officialdom will be one of the areas of interest after the incident.

According to human rights website Minghui.org, Zhang has been pursued by the overseas organization “World Organization to Investigate the Persecution of Falun Gong” for his involvement in following the Jiang faction in persecuting the Falun Gong spiritual practice.

Xinjiang party secretary has high possibility of being sacked

Zhang’s ambiguous response reflects his hesitant attitude towards Xi’s leadership. In the CCP’s officialdom, this is enough to increase the possibility of being sacked.

Recently, mainland Chinese provincial and municipal level officials have rushed to declare their stance on the “four consciousnesses” (the ideology, the whole, the core, and the line) and the “Xi Leadership Core.” The top leaders of Tianjin, Sichuan, Hubei, Anhui, Guangxi, Hainan, Jiangsu, Heilongjiang, Shanxi, Henan, Hunan, and other places even spoke out in firm defense of Xi Jinping as the core of leadership.

Zhang undoubtedly sent a message to all levels of corrupt officials to say “no” to Xi.

Zhang’s attitude on this issue was quite interesting. In early January, Zhang mentioned at a meeting “firmly maintaining the authority of Xi Jinping.”

On Jan 15, Zhang organized a conference for the Xinjiang Autonomous Region Standing Committee to study the policies of the Central Discipline Inspection Commission. During the conference, he called for “high consistency in thought and action with the central government.”

On Jan 24, when Zhang attended the Xinjiang Enlarged Meeting of the Standing Committee, he proposed “strengthening awareness and follow-up on the policies.”

Regardless of his way of expression, Zhang has never mentioned the “Xi Leadership Core.” The reason may be that in the era of Jiang Zemin’s leadership, Jiang used to be called the “Jiang Leadership Core.”

When Zhang replaced Wang Lequan as Xinjiang’s CCP secretary in 2009, he received a strong recommendation from Zhou Yongkang, then-Secretary of the Central Political and Legal Affairs Commission. It is well known that both Zhang and Zhou’s wives worked for China Central Television (CCTV).

Negative news about Zhang’s officialdom has been heard on several occasions including that he will be suspended from office for further investigation for his involvement in Zhou’s case and other problems.

In the early hours of March 4, when China’s annual political meetings known as the Two Sessions were about to open, Watching, a Xinjiang Internet media funded by the Xinjiang local government, displayed a letter with the title “Open letter requesting Xi Jinping to resign from the Party and state leadership.” Later, they said they had been hacked.

It has been said that the incident is another type of stunt likely initiated by the Jiang faction. If this were true, Zhang’s position change would not be a simple transfer. He might follow in the footsteps of Zhou Benshun, party leader of Hebei expelled in 2015.