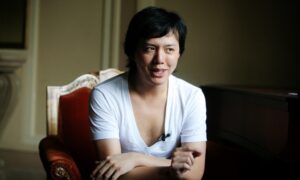 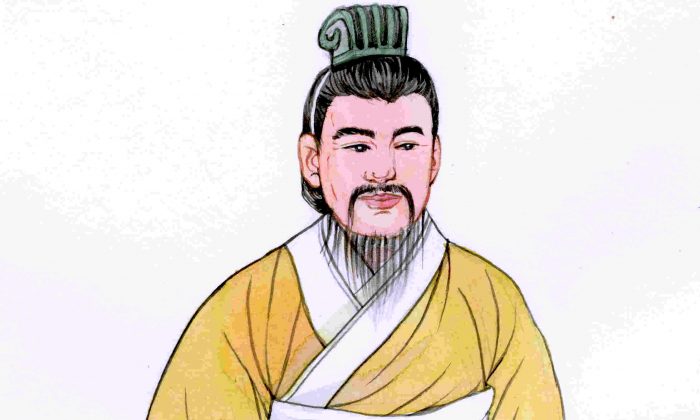 Xiao He, dedicated prime minister to Emperor Gaozu of Han (Liu Bang), is known for his sound advice, foresight, and devotion to the best interests of the people. (Blue Hsiao/Epoch Times)
China

Xiao He: One of the ‘Three Heroes of the Early Han Dynasty’

Liu Bang (劉邦) was the first emperor of the Han Dynasty (漢朝) (206 B.C.–A.D. 220). His success in taking the throne is largely attributed to the great abilities of his subordinates.

Xiao He (蕭何) was one of the subordinates that Liu Bang trusted the most. Because of his sound advice, his foresightedness, and his devotion to the people, Xiao He is considered one of the “Three Heroes of the Early Han Dynasty (漢初三傑).”

Xiao He began his statesman career during the Qin Dynasty (秦朝) (221–206 B.C.) as a low level official. He was known to always handle complicated issues in a clear and fair way and thus gained successive promotions.

Being from the same hometown, Xiao He knew Liu Bang throughout childhood and they became close friends. Xiao He always generously helped Liu Bang, who was a lower level officer at the time.

Near the end of the Qin Dynasty, government corruption led to the rise of many rebel armies. Liu Bang was the first commander of one such army to conquer the Qin capital, Xiányáng (咸陽).

It is said that when Liu Bang’s troops entered the city, unlike everyone else who rushed to loot gold and other valuables from the royal treasuries, Xiao He painstakingly collected and preserved many legal documents, and geographical and household records.

Later, when Liu Bang fought against other armies for the throne, the materials Xiao He had rescued proved invaluable. They contained detailed information about the populations, local conditions, and characteristics of fortresses, passes, and other strategic places.

Xiao He was also instrumental in helping persuade talented people to work for Liu Bang. One such person was General Han Xin (韓信), who was a rare military genius.

When Han Xin first joined Liu Bang’s army, he was merely appointed as an officer managing the army’s food supply. Realizing that Liu Bang did not appreciate his talent, Han Xin decided to leave with a group of other rebels who wanted to find an army worthy of their skills.

Hearing that he had left, Xiao He went after Han Xin, chasing him day and night until he succeeded in persuading him to return. This event came to be known as “Xiao He pursues Han Xin under the moon (蕭何月下追韓信).”

This famous saying is now used to describe a situation in which urgent action has to be taken immediately without seeking official permission.

Liu Bang had not been informed of Xiao He’s plan and, therefore, assumed that Xiao He had deserted, as well. When Xiao He returned with Han Xin, Liu Bang was surprised. He asked Xiao He why, of all the rebels that had deserted, had he chosen to bring back Han Xin.

Xiao He replied that he knew Liu Bang would be unable to win battles without the help of Han Xin. After much persuasion, Liu Bang heeded Xiao He’s advice and appointed Han Xin as a chief general.

Liu Bang treasured Xiao He’s advice and, when he became emperor, rewarded Xiao He by giving him the authority to wear a sword and to keep his shoes on in the imperial court, a high honor.

Soon after he became emperor, Liu Bang led his army to put down a rebellion. Upon returning to the capital, Liu Bang appointed Xiao He as prime minister, the second most powerful role in the court, and allocated hundreds of soldiers to protect him.

Liu Bang, however, was known to be a suspicious and jealous man.

A guest of Xiao He warned him that the emperor, having appointed Xiao He to such a high position, would soon grow uneasy of his power and his life might be in danger. Xiao He assured the guest that he knew the soldiers were sent by the emperor to keep him under surveillance. To alleviate Liu Bang’s suspicions and show his loyalty, Xiao He politely declined any rewards of the office.

However, his efforts were unsuccessful as Liu Bang was still unhappy about Xiao He’s popularity among the people. When Liu Bang left the capital to put down another rebellion, he again sent his soldiers to watch Xiao He.

Xiao He believed he had no choice but to adopt another guest’s suggestion that he deliberately destroy his own reputation by seizing people’s lands. Ironically, Xiao He was so popular among the people that they were glad to let him have their land.

When Liu Bang realized the situation, his jealousy increased. Therefore, when Xiao He asked Liu Bang to open up the unused land in the royal garden to allow the poor to grow food there, he angrily refused and jailed Xiao He under the accusation of accepting bribes and selling national lands.

A military officer challenged Liu Bang, asking what crime Xiao He had committed. Liu Bang asserted that Xiao He had colluded with greedy businessmen, had taken bribes, and had tried to embezzle the people’s lands. He then declared that Xiao He, as a corrupt prime minister, deserved a life sentence.

The officer said: “During rebellions, you were away from the capital leading your army, and the prime minister stayed behind to keep things in order. If he wanted to seize power, he had plenty of opportunities then, but he did not do so.”

“His loyalty has been proven, and there was no reason for him to care about bribes. All of those accusations are completely untrue.”

Liu Bang knew the officer was right, so he reluctantly released Xiao He.

Though Xiao He devoted his life to his nation and never forgot his duty as prime minister even when he was unjustly treated, he had one stain on his name.

Han Xin, whom Xiao He had recommended to Liu Bang, was a well-loved and formidable general. Liu Bang had begun to fear that Han Xin would one day turn on him and take the throne.

Out of fear, Liu Bang demoted Han Xin from his position as King of Chu to Marquis of Huaiyin and placed under house arrest. However, Han Xin remained loyal and continued to succeed on the battlefield.

In 196 B.C., when Liu Bang was away suppressing a rebellion, Xiao He conspired with Empress Lü (吕后) to have Han Xin arrested.

Xiao He sent a letter to Han Xin requesting his presence in the capital. Although Han Xin knew that it was likely a trap and his soldiers begged him not to go, he faithfully followed orders.

When Han Xin arrived at the imperial palace, he was arrested for treason and, after a mock trial, was executed. This event is infamous in history and Xiao He’s role in it is greatly reviled.

Despite this event, Xiao He went on to serve the next emperor, Emperor Hui of Han (漢惠帝), before passing his post on to Cao Shen (曹參), an official and friend who had also been instrumental in building the new dynasty.

As prime minister, Xiao He also revised many of the harsh laws from the Qin Dynasty and created the Jiuzhang Lu (九章律), a new legal code with nine chapters. This included the well-known hù kǒu (戶口) system for taxation and conscription.